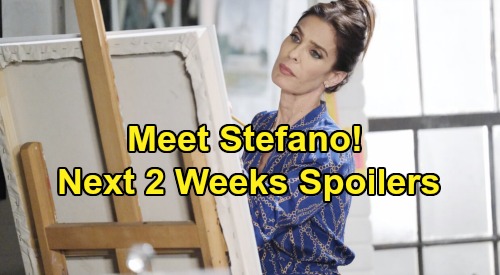 Days of Our Lives (DOOL) spoilers for the next two weeks tease that some great drama’s on the way. During the week of November 25-29, Chad DiMera (Billy Flynn) will get a huge surprise. In a darkened suite, Chad will call out to his father as a shadowy figure lurks. There are a couple ways this meeting could go.

Chad believes this is Stefano DiMera (last played by the late Joseph Mascolo), but it obviously isn’t – not the real one anyway. Days spoilers say “Princess Gina Von Amberg” aka Hope Brady (Kristian Alfonso) will complete her portrait on November 27, which is when Stephen Nichols (Steve Johnson) returns. DOOL seems to be saving the big “Steveano” reveal for when that portrait is turned around.

Steve likely has Stefano’s implanted memories, which explains why Chad’s convinced he’s the real deal. He felt like Stefano knew things only Stefano would know. That brings us back to this meeting, which will occur before the portrait bombshell. Since Days of Our Lives doesn’t want to show Steve’s face yet, what will they do?

It’s possible the man will simply be a minion sent by “Stefano.” It may be a messenger who buys “Stefano” a little more time. It’s also possible fans will see Chad’s reaction to “Stefano” and nothing more. Chad may listen to “Stefano’s” pitch offscreen, which would leave viewers in the dark a bit longer.

Days of Our Lives will be preempted on Thursday, November 28, and Friday, November 29. Eric and Xander’s fierce battle will continue during the week of December 2-6. Xander won’t want to give up Mickey, so Sarah will try to play peacemaker. She’ll hope they can all reach a compromise here.

Eric will eventually agree to share custody, but he’ll only do it on one condition. Chances are good Xander won’t like what Eric demands! Later, Mickey will come down with a fever and leave Eric concerned. He’ll get his first taste of worrying about Mickey as her dad.

As for Nicole, she’ll get an earful from Xander for blabbing. Xander won’t be pleased that Nicole blew up the paternity truth – which probably isn’t the truth at all. It seems likely a baby swap went down, which means Sarah’s dead baby may have been switched with Kristen DiMera’s (Stacy Haiduk) healthy one.

Ciara Brady (Victoria Konefal) will break into the metal briefcase she stole from Xander’s office, but will any proof be inside? This could certainly be dangerous for Xander and Victor Kiriakis (John Aniston), who are keeping some major secrets. In prison, Ben Weston (Robert Scott Wilson) will try to thwart his father’s attack on Will Horton (Chandler Massey). Clyde Weston (James Read) will hopefully be stopped before he does serious harm.

It’d be fitting for Ben to save Will’s life after previously trying to take it! Ben and Will’s bond will continue to grow behind bars, but it’s Sonny Kiriakis (Freddie Smith) who’ll take a step forward romantically. Evan Frears (Brock Kelly) will steal a kiss from Sonny, but how will Sonny respond?

It sounds like the next two weeks will be packed with action. We’ll give you updates as other Days news comes in. Stick with DOOL and don’t forget to check CDL often for the latest Days of Our Lives spoilers, updates and news.