BY hellodrdavis on November 22, 2019 | Comments: one comment
Related : Days of Our Lives, Soap Opera, Spoiler, Television 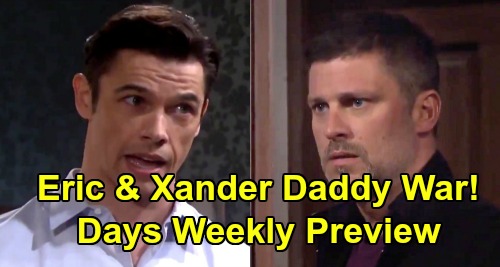 Days of Our Lives (DOOL) spoilers preview teases that we’re in for a week of revelations and Daddy drama on the NBC soap. The DOOL promo video for the week of November 25 promises some major movement on two big storylines. Before we get into that, we should note that the show will be nationally pre-empted for Thanksgiving on both Thursday, November 28, and Friday, November 29. But there should be plenty of excitement earlier in the week, so let’s get right into it!

First off, the promo addresses the paternity of Sarah Horton’s (Linsey Godfrey) baby. As DOOL viewers know, Xander Kiriakis (Paul Telfer) has assumed the role of dad to baby Mickey, but it’s all based on a lie. Mickey’s real bio dad is Eric Brady (Greg Vaughan) and the new promo video shows the action after Eric has learned the truth that he’s the dad.

According to DOOL spoilers, Eric will learn the truth from Nicole Walker (Arianne Zucker), who will break down and confess the truth after Eric proposes to her. She just won’t feel like she can keep the truth from him any longer, and she won’t want to enter into a marriage while keeping such a huge secret from him, so she’ll spill the beans.

The good news in this story is that Mickey – who was kidnapped – will be returned to Sarah this week, but then it looks like Sarah and Xander will have to immediately face an angry Eric, who will confront them and insist on seeing his daughter. These three will have a lot to work out for sure.

Next, the promo addresses another “dad” situation, this time involving a father and son. As DOOL viewers know, Chad DiMera (Billy Flynn) has set up a meeting at The Salem Inn with who he believes is Stefano DiMera (last played by Joseph Mascolo). And on the episode airing on Friday, November 22nd, Chad walked into a hotel room with “Stefano” waiting inside.

The Days of Our Lives promo shows Chad inside the hotel room calling out for his father, with a shadowy male figure standing across the room. Days spoilers say that the meeting isn’t going to go as Chad plans, so something big is likely going to happen to really rattle Chad.

We should note that DOOL buzz is that the mystery figure may be Steve Johnson (Stephen Nichols), who may have had Stefano’s memories mapped onto his brain. There’s been a lot of talk lately on the show about Steve and how he separated himself from his family and didn’t even return to Salem for his sister Adrienne Kiriakis’ (Judi Evans) funeral.

It would certainly explain a lot if the reason that Steve divorced Kayla Johnson (Mary Beth Evans) and didn’t come home for his own sister’s funeral is because he’s not “Steve” anymore and has assumed the persona of Stefano.

And it would certainly rattle Chad if the person who turned around in that hotel room was Steve, but with all of Stefano’s memories and mannerisms. We’ll see what happens here, but we should note one timing issue. Even though Chad may see the shadowy figure on the episode airing on Monday, November 25, if the person is Steve, then viewers won’t see him until Wednesday, November 27, when Stephen Nichols is scheduled to return to canvas.