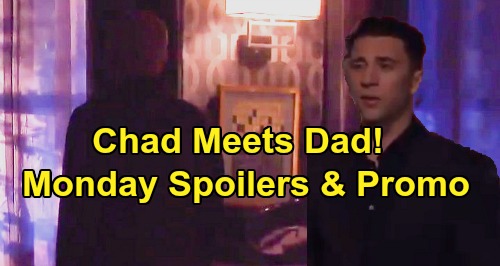 Days of Our Lives (DOOL) spoilers for Monday, November 25, tease that Nicole Walker (Arianne Zucker) will deliver a double bombshell. First, she’ll turn down Eric Brady’s (Greg Vaughan) marriage proposal and leave him unbelievably confused. Eric thought Nicole would happily put that ring on her finger, so he’ll wonder what the problem is. He won’t get why Nicole doesn’t want to make things official.

DOOL fans can expect Nicole to drop another bomb at that point – a far worse one that’ll turn their relationship upside down. Nicole will admit she’s been keeping a terrible secret from Eric. She’s been hiding the truth about Sarah Horton’s (Linsey Godfrey) baby. Nicole will confess that Sarah’s baby belongs to Eric, so that’ll be a huge shock. Eric will be even more stunned when he realizes Nicole’s known for over a year.

Days of Our Lives spoilers say Eric will lash out at Nicole, but he’ll also realize Sarah should bear most of the guilt here. As the mother, Sarah needed to be the one to share this information. Of course, there’s a good chance Mackenzie “Mickey” Horton isn’t really Sarah’s daughter. She was probably swapped with Kristen DiMera (Stacy Haiduk) and Brady Black’s (Eric Martsolf) child, so that’ll bring another round of bombshells down the road.

In the meantime, Ciara Brady (Victoria Konefal) will try to fight off Mickey’s kidnapper. She managed to get Ray wasted and hoped he had passed out for the night. Unfortunately, Ray woke up and gripped Ciara’s shoulder. She wanted to grab Mickey and run, but now Ray’s in her way once again.

However, Ciara’s got sobriety on her side and Ray most certainly does not. It shouldn’t be too hard to subdue Ray and get out of there. Whatever the case, Days spoilers say Mickey will be safely returned to Sarah soon enough. That’ll leave Xander Kiriakis (Paul Telfer) in a bit of a bind. He just arrived at the police station to hand “Hope Brady” aka Princess Gina Von Amberg (Kristian Alfonso) his confession.

There’s no need for that confession if Mickey’s safe, so Xander will do everything he can to destroy it. While Xander works on that, Abigail DiMera (Kate Mansi) will face off with Eli Grant (Lamon Archey). She’ll call Eli out for snooping on Chad DiMera’s (Billy Flynn) laptop, but he may suggest he’d rather talk about what Chad and Abigail are plotting.

Other Days of Our Lives spoilers say Chad’s meeting with Stefano DiMera (last played by the late Joseph Mascolo) won’t go as planned. Princess Gina warned “Steffie” not to reveal himself until the time is right. DOOL viewers definitely won’t see Stefano yet, but will Chad? There’s a possibility Stefano will show off his new look to his son, but he may have another trick up his sleeve instead.

Based on all the clues and Days spoilers out there, it looks like Steve Johnson (Stephen Nichols) has Stefano’s memories and will make his first appearance as “Stevano” next week. We’ll give you updates as other Days news comes in. Stay tuned to DOOL and don’t forget to check CDL often for the latest Days of Our Lives spoilers, updates and news.