Days of Our Lives Spoilers: Marlena Intrigued by Secret Admirer’s Gift – ‘Stefano’ Goes Public as Steve After Plan Kicks Off 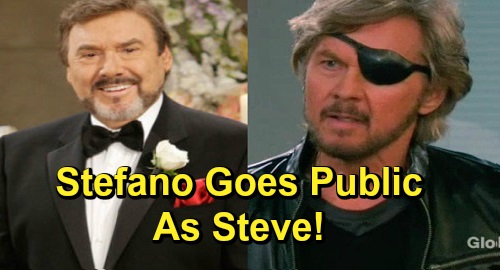 Days of Our Lives (DOOL) spoilers tease that Stefano DiMera (last played by Joseph Mascolo) will put his plan in motion. It’s sure to be a tricky one since Stefano doesn’t quite look like himself! “Princess Gina Von Amberg” aka Hope Brady (Kristian Alfonso) pointed out that Stefano’s old portrait was a bit out of date. We’ve seen younger-looking hands and the younger-looking back of his head as well.

As a result, some Days fans flew into a rage thinking Stefano had been recast with someone younger. However, Stefano is almost certainly Steve Johnson (Stephen Nichols) with Stefano’s memories implanted. There’s no need to get worked up over a recast since this isn’t a recast at all. “Stefano” will eventually become Steve again just like “Princess Gina” will eventually get back to being Hope.

Of course, they’ll stir up plenty of trouble in the meantime! Days fans know “Princess Gina” is doing her best to grow closer to John Black (Drake Hogestyn). Marlena Evans’ (Deidre Hall) early return threw off “Princess Gina’s” plot, so she’ll have to shift her strategy.

As for “Stefano,” he intends to intrigue his “Queen of the Night.” Days of Our Lives spoilers say “Stefano” will likely make his first contact with Marlena on Thanksgiving in Salem. That’s set to air on November 27 since Days will be preempted on November 28. Marlena will receive a special delivery from someone mysterious. She’ll open it up and realize she’s got a secret admirer, so she’ll naturally wonder who it is.

It sounds like “Stefano” will want to keep Marlena guessing at first. He’s the kind of guy who loves mind games, so this should be fun for him. Once “Princess Gina” reveals the new portrait and we most likely see that “Stefano” looks like Steve, they can put “Steve” back in the action. DOOL won’t have to preserve the secret anymore, so it won’t be long until “Steve” makes himself known.