Days of Our Lives Spoilers: Who Is The Better Abigail Deveraux – Kate Mansi or Marci Miller? 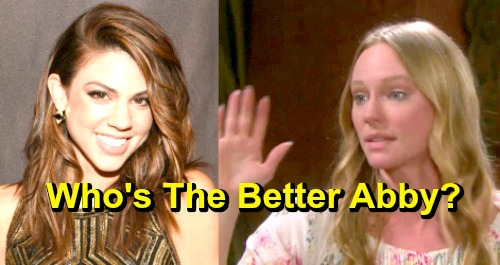 Days of our lives spoilers (DOOL) discusses Abigail Deveraux and her two portrayers: Kate Mansi, who is slated to return; and Marci Miller who was sandwiched between Mansi’s runs. Days of Our Lives has had two amazing actresses who have played Abigail Deveraux, and both have superb chemistry with Billy Flynn. So who did it better, Kate Mansi or Marci Miller?

Kate Mansi Had A Great Run As Abby

Kate Mansi began playing Abigail in 2010 although her first appearance wasn’t until March 2011 and held the role until the end of 2016. Kate was a newcomer to daytime tv but instantly connected with Chad Dimera portrayer Casey Deidrick. Kate also played opposite Patrick Muldoon as Austin Reed and Nathan Owens as Cameron Davis as well as James Scott who played E.J. Dimera.

Later, Kate played opposite Robert Scott Wilson as Ben Weston. Kate had chemistry with all of them, and most fans didn’t think anyone could replace Kate as Abigail.

Marci Miller appeared in the role of Abigail in 2016 after she was presumed dead in a plane crash. As an Abigail fan, many fans honestly did not expect to like Marci’s version of Abigail. Days fans had loved Kate’s portrayal and didn’t believe anyone could replace her, but they quickly realized they were dead wrong.

Marci walked in the door, and she didn’t try to change Abigail into a different character, she kept her true to who and what she was. Marci Abigail was fierce and loyal and loved her family. Marci also managed to make fans love her alter Gabby as well. On top of all this, Marci and Billy had so much chemistry together that they made me root for them to reunite.

It didn’t hurt that Marci’s chemistry with Tyler Christopher was great as well. Marci made it almost impossible to not except her Abigail.

Despite Marci’s popularity many expected to rejoice in Kate Mansi’s return to the role of Abigail, and didn’t expect to miss Marci’s version because they had loved Kate’s so much. With Kate’s return some fans felt like something was missing.

With Kate, Gabby didn’t come across as a different character, and seemed forced – maybe it was because she was only acting like she was Gabby rather than actually still having the split personality disorder, but it left some longing to see Marci in the role.

So who was the better Abigail Deveraux? Are you team Marci Miller or Team Kate Mansi? Come back to CDL for all the best Days of Our Lives spoilers, news and features.