Days of Our Lives Spoilers: Kate Mansi and Billy Flynn Return to DOOL – Welcome Back Chabby 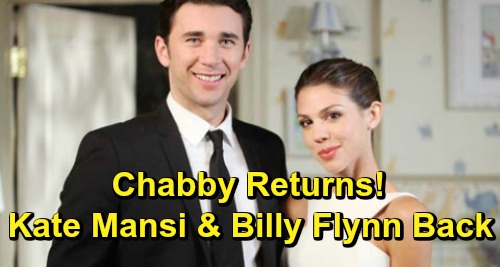 Details have not been released as to how long they will stay or exact airdates, but Days of Our Lives viewers know that Thanksgiving and Christmas holidays start in the fall, and the tradition of the tree at the Horton home with all the family ornaments being hung will be coming up.

It is possible they may just return for the tree trimming or for the holidays, with more details to be released as the time draws nearer.

Days of Our Lives viewers will recall the tumultuous storylines leading up to first their divorce, then their remarriage. Abby manifested various alters including Gabby, the falsified paternity test for Charlotte DiMera (Chloe Teperman) which was discovered by “Grandma” Julie Williams (Susan Seaforth Hayes).

Gabi Hernandez (Camila Banus) was responsible for the falsified paternity test which showed Stefan DiMera (at that time Tyler Christopher, now Brandon Barash) was Charlotte’s father instead of Chad DiMera, and Julie took a tumble down the stairs after confronting Gabi with her discovery!

Luckily, Julie was just knocked out for a day or so but recovered successfully, as did Abby and Gabi’s former friendship; Abby forgave Gabi because she preferred to take the high road.

It took Abby a little while to forgive Chad, as he went along with the opinion that Abby needed to return to the mental health wing of Salem University Hospital.

While there she was really faking being Gabby to get her baby back from Stefan, who had taken her home with him. Eventually, she was able to forgive Chad and they remarried in the Horton House with Julie officiating.

The couple then immediately relocated in Paris, France where Chad had taken a job running the overseas office of DiMera Enterprises after being fired from Titan Industries previously.

Chad and Abby are a favorite supercouple on Days of Our Lives, and most fans will take as much as they can get of them, even if it’s only for a short term return!

Stay tuned to Days of Our Lives and keep checking CDL frequently for all the latest DOOL news, updates, and developments!