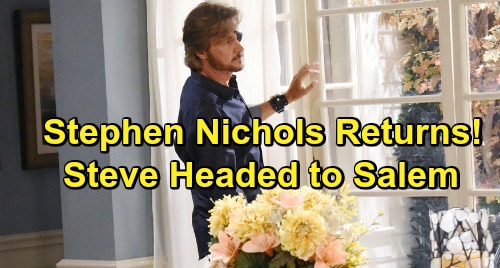 Days of Our Lives (DOOL) spoilers tease that another huge return is on the way. DOOL viewers were just treated to Nicole Walker’s (Arianne Zucker) comeback and we know others are in the works as well. However, the latest return is a big surprise and has many “Stayla” fans cheering.

Soap Opera Digest confirms that Stephen Nichols will reprise his role as Steve Johnson, so he’s headed home for some heartfelt reunions. Nichols last aired as Steve in August 2018, but Days watchers have been missing him ever since. Salem just isn’t the same without “Patch” around!

Steve’s departure left Dr. Kayla Johnson (Mary Beth Evans) in romantic limbo and has brought some serious sorrow. Kayla has battled guilt over her role in Steve’s drama and even fears he blames her, but she’s only ever had good intentions. Once he returns, it should be easy for Steve and “Sweetness” to sort this out. They’re meant to be, so there’s no obstacle too great for them to overcome.

Of course, there’ll be someone else for Steve to reconnect with in town. Steve will have a chance to see his now alive brother, Jack Deveraux (Matthew Ashford). Days of Our Lives viewers were disappointed when Jack finally hit town and Steve wasn’t on canvas. It’s nice that Steve and Jack will have a chance to bond again after all.

As a bonus, it seems likely that Jack will have his memories back by then. Days of Our Lives films nearly six months in advance, and Nichols was just contacted about a month ago. He’s currently on set taping new episodes, but it’ll still be a while before we see those scenes air. Jack will hopefully be the real Jack again by the time he embraces Steve and gets a warm welcome back from the dead.

Days of Our Lives spoilers hint that a major arc is planned for Steve, so he might make quite a splash with his comeback storyline. It doesn’t sound like this will be a quick visit either, so that’s fantastic news. Are you looking forward to Steve’s return? We’ll give you updates as other Days details emerge. Stick with DOOL and don’t forget to check CDL often for the latest Days of Our Lives spoilers, updates and news.