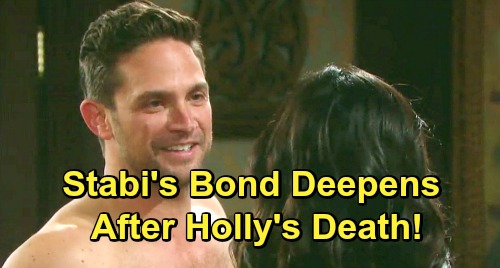 Days of Our Lives (DOOL) spoilers tease that Stefan DiMera (Brandon Barash) is about to get busted. Days fans know he enjoyed a couple hot hookups with Gabi Hernandez (Camila Banus) against his better judgment. He’s trying to convince himself that he wants nothing to do with Gabi, but the lust in his eyes tells a different story.

On May 6, Stefan will land in a tight spot. It looks like he may fall back into bed with Gabi since he’ll be trying to sneak her out of the DiMera mansion. If not, Stefan and Gabi will at least be sharing some close moments.

Of course, Stefan won’t want to blow his blooming romance with Chloe Lane (Bjorlin). He’s already at a disadvantage since he promised to protect Holly Jonas (Harlow and Scarlett Mallory) and failed. It’s a bad idea to be sneaking around with Gabi right now, but they’ll indeed try to keep their meeting on the down low.

Unfortunately, someone will catch Stefan ushering his sidepiece out of the house. Will it be Chloe or someone else? Will Stefan and Gabi be able to talk their way out of trouble? Time will tell, but none of this may matter much once some tragic news hits.

Days of Our Lives spoilers say Ben Weston (Robert Scott Wilson) and Ciara Brady (Victoria Konefal) will deliver updates on Holly. Since Holly will likely die or become the victim of a faked death plot on new Days episodes next week, May 6 to May 10, Ciara and Ben will spread the word. They’ll have to tell Chloe and Stefan that the worst-case scenario actually happened.

There’s a good chance Chloe’s rage toward Stefan will rev up. Between her Gabi suspicions and Stefan’s security issues at the mansion, Chloe may decide she’s done with him. She might be in too much pain to put up with Stefan and his troubling behavior.

Days of Our Lives spoilers say that’d leave Gabi with a clear path to victory. Stefan will soon be more vulnerable than ever, so Gabi’s efforts to seduce Stefan should get easier. However, it’ll be easier to connect with emotionally fragile Stefan as well. That could bring another round of DOOL complications for Gabi, so stay tuned.

It sounds like some big romantic developments are coming up in Salem. We’ll keep you posted as other Days details emerge. Stick with DOOL and don’t forget to check CDL often for the latest Days of Our Lives spoilers, updates and news.