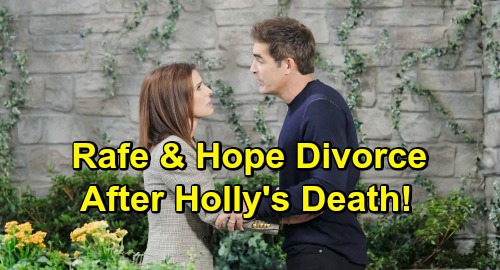 Days of Our Lives (DOOL) spoilers tease that Rafe Hernandez (Galen Gering) and Hope Hernandez (Kristian Alfonso) are headed for a difficult divorce. These two have had a terrible time lately. Rafe moved out of their home to care for Jordan Ridgeway’s (Chrishell Hartley) baby, which upset Hope to no end. And Hope has been spending time with Ted Laurent (Gilles Marini), which Rafe simply cannot understand. The situation is a real mess.

But it looks like something big will soon strike a lethal blow to their already weakened marriage. Days of Our Lives spoilers foreshadow a horrible tragedy involving Holly Jonas (Harlow and Scarlett Mallory). Details are sketchy at this point, but it appears that Holly will be involved in a terrible accident, and that Rafe will either cause or contribute to the accident in the course of trying to save her.

Worse, DOOL spoilers indicate that Rafe will be operating “rogue” after disobeying a direct order from Hope. Of course, Hope is the police commissioner and Rafe’s superior within the Salem PD. She’ll tell him to do one thing, and he’ll do another. Perhaps she’ll order him to stand down, and he’ll decide in the moment to chase after Holly and her captors.

That could certainly lead to a car chase and an accident that could either take Holly’s life or leave her serious injured. Days of Our Lives spoilers say that Rafe will end up in serious trouble, Holly will wind up dead, and Hope will lose her position as police commissioner, since Rafe’s blunder occurred on her watch. She’ll probably be seen as not having a good command over her squad, which will lead to her firing.

DOOL spoilers indicate that Hope and Rafe’s marriage will implode after the tragedy. Hope will probably be furious with Rafe for disobeying her direct order, and Rafe really won’t have a good excuse. It will likely be the last straw for their already tenuous relationship. It’s hard to imagine Rafe moving home after all of this goes down.

Of course, another wrinkle in this story is that Ted is one of Holly’s captors, along with Xander Cook (Paul Telfer). At some point down the line, Rafe will likely find out that Ted was behind the whole thing, and that will make him furious. He’s known that Ted was no good from the very start, and he may blame Hope for letting Ted into their lives and contributing to the whole situation.

At any rate, it doesn’t look like there will be much hope for salvaging “Rope’s” marriage from here. Chances are, after the Holly tragedy, their marriage will be irreparable. Will you be sad to see Rafe and Hope’s marriage come to an end? Stay tuned to DOOL and don’t forget to check CDL often for the latest Days of Our Lives spoilers, updates, and news.