Days of Our Lives Spoilers: Crazy Jordan Vows to Murder Anyone Who Gets in Her Way – Ben Delivers Scary Warning to Ciara 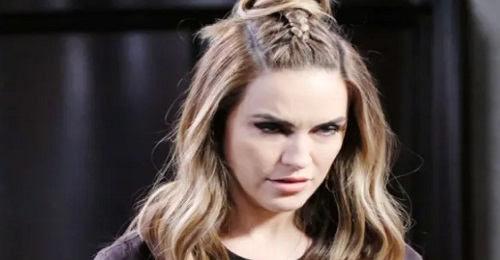 Days of Our Lives (DOOL) spoilers tease that Ben Weston (Robert Scott Wilson) will have a bad feeling about his sister. DOOL fans know Jordan Ridgeway (Chrishell Hartley) was released from Bayview and now has custody of her son again. However, it’s easy to see that not much has changed.

Jordan still isn’t convinced that Ben could ever truly shake the evil that was inside of him. She doesn’t feel she can trust him around David Ridgeway, so she’s determined to keep him at a distance. Ben would love to spend some time with his nephew, but he’s more concerned about Ciara Brady (Victoria Konefal) right now. It’s clear she could be in grave danger.

Jordan claims she regrets trying to kill Ciara, but does she really? Ben felt like Jordan was making some veiled threats recently. It turns out those threats will become more direct in the week ahead. Days spoilers say Jordan will flat-out vow to murder anyone who gets in her way! That obviously includes Ciara, who’s perhaps Jordan’s biggest adversary at the moment.

Jordan’s main goal will be protecting David no matter the cost. She’ll have no problems killing anybody that tries to hinder their bond. What kind of incompetent doctors released this nut job from Bayview?! They must be asleep at the wheel in there. Jordan hasn’t truly recovered; it seems she’s just doing a better job of masquerading as a sane person.

Nevertheless, Ben knows his sister better than anyone. He can tell that something’s not right, and his suspicions are only going to get worse. Days of Our Lives spoilers say Ben will deliver a warning to Ciara during the week of September 23-27. He’ll suggest Ciara shouldn’t be alone with Jordan under any circumstances. Ben just won’t think they can take any chances with Ciara’s safety.

Ciara understands that Jordan’s been a serious threat in the past, but she may think she can take care of herself this time around. She intends to fight for Ben’s place in David’s life, which could bring major Days of Our Lives drama.

Will Ciara find herself in another perilous situation? Will Ben have to rescue Ciara once again? We’ll give you updates as other Days news emerges. Stay tuned to DOOL and don’t forget to check CDL often for the latest Days of Our Lives spoilers, updates and news.