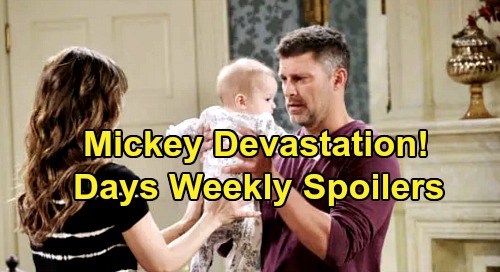 Days of Our Lives (DOOL) spoilers for the week for December 9-13 tease that some shockers are coming up in Salem. First, Abigail Deveraux (Kate Mansi) will hope for progress in the mystery of who pushed Jennifer Horton (Melissa Reeves). She’ll take her mom back to the scene of the crime and hope it shakes a few memories loose.

Jennifer may not have total recall yet, but “Princess Gina” aka Hope Brady (Kristian Alfonso) will definitely get nervous. She’ll mull over the idea of eliminating Abigail, which certainly sounds like she’ll consider plotting Abby’s murder! Fortunately, “Princess Gina” will decide to nix the idea and to go plan B. She’ll prepare to make a quick escape as the walls close in, but will something change her mind?

Regardless, Jennifer will put the drama out of her mind for a while. She’ll finally return home with Jack Deveraux (Matthew Ashford), so Days fans can expect a very romantic evening for these two. Next, let’s talk about Eric Brady (Greg Vaughan) and Sarah Horton (Linsey Godfrey). They’ll find themselves incredibly fearful after Mackenzie “Mickey” Horton gets a scary diagnosis.

Other Days of Our Lives spoilers say JJ Deveraux (Casey Moss) will only want one thing: revenge. He’ll plan to make Kristen DiMera (Stacy Haiduk) pay for taking Haley Chen’s (Thia Megia) life, but Lani Price (Sal Stowers) will come to Kristen’s rescue in Rome. She’ll do everything in her power to convince JJ that Haley’s death was an accident. Even if JJ won’t believe it, Lani will likely beg him not to make a mistake he can’t take back.

Back in Salem, Gabi Hernandez (Camila Banus) will have a heated argument with Chad DiMera (Billy Flynn). She’ll try to toss Chad out of the DiMera mansion, but he may find some loophole that allows him to stick around. Over with Justin Kiriakis (Wally Kurth), he’ll happily move in with Kayla Brady (Mary Beth Evans) and begin a new chapter with her. Justin will feel great about where things are headed.

However, Justin may battle rage and pain during his upcoming chat with Will Horton (Chandler Massey). They’ll face each other soon, so Justin will apparently visit Will in prison and get a chance to reveal how he feels. Will’s deeply remorseful for his role in Adrienne Kiriakis’ (Judi Evans) death, but all he can do now is move forward.

As for Sonny Kiriakis (Freddie Smith), he seems to be feeling a bit stuck. Sonny loves Will, but he’s finding it tough to get past the fact that Will killed Adrienne. There’s a lot of sorrow and anger in his heart, but Evan Frears (Brock Kelly) has been a source of comfort. DOOL viewers will recall that Evan planted a kiss on Sonny recently, but Sonny’s still married and isn’t ready to move on yet.

When Kate Roberts (Lauren Koslow) hears about that kiss, she’ll fly into a rage. It won’t be long until Kate rips into Sonny for kissing another man behind Will’s back. Days of Our Lives spoilers indicate that Kate also has a secret, which will be revealed during the week of December 9-13. Since Kate’s always full of surprises, it’ll be interesting to see what else she’s got up her sleeve.

Back with Lani, she’ll face a crushing blow when she learns Gabi and Eli Grant (Lamon Archey) are a couple. A different kind of crushing blow will come for Ben Weston (Robert Scott Wilson), whose legal nightmare will get even worse. Days of Our Lives spoilers say Ciara Brady (Victoria Konefal) will get some difficult updates, but she’ll stand by Ben and assure him they’re going to get through this.

It sounds like some exciting episodes are in store. We’ll keep you posted as other Days news comes in. Stay tuned to DOOL and don’t forget to check CDL often for the latest Days of Our Lives spoilers, updates and news.