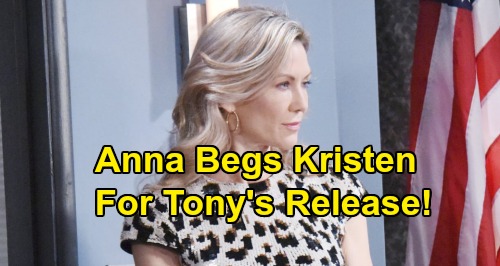 Days of Our Lives (DOOL) spoilers tease that Anna DiMera (Leann Hunley) will be feeling desperate. As DOOL viewers know, she was recently reunited with her true love Tony DiMera (Thaao Pehghlis). Tony had been presumed dead for a decade, so Anna was quite surprised to find him very much alive and well. Tony was another one of Dr. Wilhelm Rolf’s (William Utay) back-from-the-dead patients, and now he’s back in action.

But there’s a big problem, and that’s that Tony is in some serious legal trouble. As DOOL viewers know, he ended up shooting and killing Ted Laurent (Gilles Marini), which promptly got him arrested and locked up without any hope of bail. Of course, he didn’t shoot Ted on purpose – rather, Ted grabbed the gun with the intention of killing Kristen DiMera (Stacy Haiduk), and Tony intervened and a struggle ensued. The gun then discharged, tragically killing Ted.

Unfortunately for Tony, the new DA Melinda Trask (Laura Kai Chen) isn’t fond of the DiMera family, and so she’s taking a hard line and denying bail for Tony. That means that Tony is sitting in jail, much to Anna’s chagrin. Anna wants nothing more than to get “her Tony” back, and she’ll fume that Kristen seems to be willing to let Tony sit in jail when she knows full well that Tony didn’t murder Ted.

But it seems that Anna will realize that Kristen is in a power position, so she’ll bite the bullet and go to see her. She’ll want Kristen to make it crystal clear to the police that Tony didn’t murder Ted, but that he was trying to save Kristen’s life, and that Ted initiated the struggle over the gun, which accidentally went off and took his life. But will Kristen oblige Anna?

Well, it seems that Kristen will at first balk at the idea of helping Tony and Anna. After all, Kristen will still be irked about Tony being resistant to help her when she was posing as Nicole Walker (Arianne Zucker). But then it appears that Kristen will find an opportunity in helping to set Tony free. As DOOL viewers know, Kristen wants nothing more than to look good in Brady Black’s (Eric Martsolf) eyes, and so it looks like she might agree to help Tony in order to score points with Brady.

Now, whether that move winds up softening Brady to Kristen remains to be seen, but it appears that Tony and Anna will benefit from it. DOOL viewers can expect Tony’s legal problems in connection with Ted’s shooting to go away, but that doesn’t mean that everything will be smooth sailing between Tony and Anna going forward. According to DOOL spoilers, Tony will soon be forced into a choice – either DiMera Enterprises or his beloved Anna – so look for the difficulties for this couple to continue.

Do you think that Tony will ultimately choose Anna over his family legacy? Stay tuned to DOOL and don’t forget to check CDL often for the latest Days of Our Lives spoilers, updates, and news.