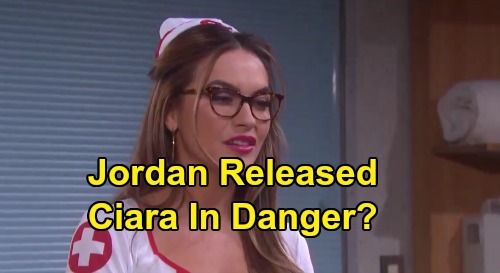 Days of Our Lives (DOOL) spoilers tease that Rafe Hernandez (Galen Gering) will soon take on another big responsibility. As DOOL viewers know, he’s been caring for Jordan Ridgeway’s (Chrishell Hartley) little boy, David Ridgeway, over the past several months while Jordan has been in a mental hospital. Jordan committed some serious crimes to land her in Bayview, including kidnapping Ciara Brady (Victoria Konefal) and holding her in a deserted cabin, which she then set on fire with Ciara inside.

Well, it seems that Jordan’s mental health treatment will soon come to an end, and she’ll be eligible for release from Bayview. But it appears to be a situation in which Jordan will be released to a responsible adult’s care, as opposed to just being set free by the institution. According to Days of Our Lives spoilers, Jordan will ultimately be released into Rafe’s care, with Rafe assuming legal responsibility for her. That will allow Jordan to be reunited with her son.

Of course, Rafe doesn’t really have much going on these days, other than caring for David, so he’ll be willing and able to take on the responsibility of caring for Jordan as well. But according to Days of Our Lives spoilers, there will be some ongoing question about whether Jordan is really as recovered as the professionals at Bayview seem to think. So, we might see some iffy behavior on Jordan’s part, or at least behavior that makes viewers wonder whether she’s still got some unresolved issues.

It looks like there will be at least one person on canvas who’s very skeptical about Jordan’s “recovery,” and that’s her brother Ben Weston (Robert Scott Wilson). Of course, Ben’s very protective of Ciara, and he’s well-aware of what Jordan tried to do to Ciara. He hasn’t forgotten how Jordan tried to kill Ciara in order to “save” her from Ben. So, Ben will naturally be worried about Jordan’s release and the effect that it could have on Ciara.

According to Days of Our Lives spoilers, Ben will be sure to voice his concerns about Jordan, but it looks like Rafe will be far more optimistic about Jordan having recovered than Ben is. In fact, it seems that the more Ben insists that Jordan could still pose a risk to Ciara, the more paranoid he’ll look in Rafe’s eyes. It seems that Rafe will think that Jordan’s just fine, which will leave Ben frustrated and very worried about his girlfriend.

We’ll see whether Ben ever becomes convinced that Jordan is really back to normal, but in the meantime, it appears that we’ll see some ongoing conflict between the two siblings. One wonders whether Jordan will allow Ben to have any kind of relationship with David, which is something that Ben very much wants. At any rate, look for Ben to seek a relationship with David while simultaneously worrying about Jordan’s mental stability.

Do you think that Ben’s fears about Jordan will be justified? Stay tuned to DOOL and don’t forget to check CDL often for the latest Days of Our Lives spoilers, updates, and news.