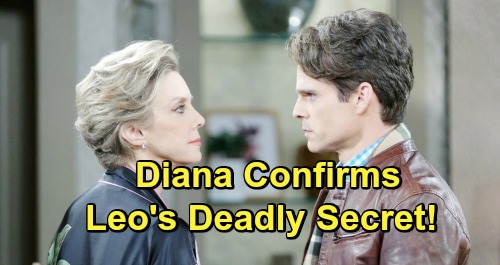 Days of Our Lives (DOOL) spoilers tease that Leo Stark – Matthew Cooper’s (Greg Rikaart) secret, that he is so afraid will come out, is that he murdered his father, or may be stepfather, Mr. Cooper!

In a recent interview said to be on the “DOOL APP” (only for I-Phones) Judith Chapman is said to have revealed that the secret Leo is so afraid Mommy Dearest will spill, is that murder. Leo’s apparently a fugitive running from the law, although there could be a mitigating backstory to all of this.

When Diana Colville was in Salem before, over twenty years ago, she was a much different character. As played by Genie Francis, she was an intrepid reporter with a sweet smile and full of innocence and enthusiasm. Flash forward to the present day, and Diana Cooper is bitter, dark, and possibly vindictive, and definitely manipulative.

When she sat down for a drink with Dr. Marlena Evans (Deidre Hall), there was a huge hint to Leo’s past and possibly Diana’s as well. Marlena mentioned a traumatic experience that could have made Leo the way he is, but Diana would not talk about it when questions. That trauma could be years of fear, and abuse by Mr. Cooper – of course it could also be the murder of Mr. Cooper itself.

It’s possible that the abuse was so severe that Leo may have killed him either in a rage built up by years of trauma, or it could have even been in self-defense; but with Leo having no alibi. If the severe abuse Marlena hinted at also was inflicted on Diana, Days of Our Lives viewers can understand why Diana would choose to keep the murder a secret.

Leo may have done both of them a favor, freeing them from years of fear. Sometimes a battered woman will strike out at their children, being too afraid to confront their abusive spouse. This could be the dynamic that is affecting Leo relationship with his dear mother.