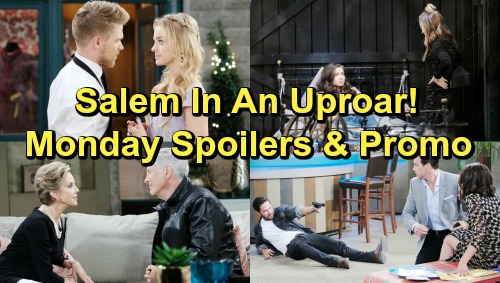 Days of Our Lives (DOOL) spoilers for Monday, February 4, tease that Ciara Brady (Victoria Konefal) will battle suspicions and confusion. When she sees Jordan Ridgeway (Chrishell Hartley) at the cabin, Ciara will wonder what in the world’s going on. Jordan is Ben Weston’s (Robert Scott Wilson) previously ordinary sister, but it turns out she’s taken a page from her brother’s crazy playbook.

Ben did some horrible things when he went off the rails, but he got the meds he needed and is trying to live a better life. He wants to escape all that darkness. However, Jordan doesn’t believe her little bro is capable of overcoming his past. She feels like Ben still poses a serious threat, so that’s why she snatched Ciara.

In Jordan’s mind, she thinks this is the only way to keep Ciara out of true danger. Days of Our Lives spoilers say Jordan will claim Ben abducted Ciara. She’ll do her best to turn Ciara against him. Nevertheless, it’ll soon become clear to Ciara that something’s not right. She’ll doubt Jordan’s story, especially when Jordan leaves her tied up and heads back to Salem later this week!

Meanwhile, Stefan DiMera (Tyler Christopher) will become Chloe Lane’s (Nadia Bjorlin) hero. She just received the knife she used to kill Mateo aka El Fideo (Andoni Gracia) in the mail, so she’s nervous about what’s coming. After Chloe ends up facing someone’s gun, Stefan will dive in front of it and take the bullet for her. His bravery and quick thinking will save Chloe’s life.

Days spoilers say Chloe will tend to Stefan’s wound and express her deep gratitude. This will be the start of a nice bond between them, but don’t expect Brady Black (Eric Martsolf) to approve. Over with Claire Brady (Olivia Rose Keegan), she’ll track down Tripp Dalton (Lucas Adams) and convince him to hear her out. Claire will apologize for sinking so low in her desperate mission to win Tripp’s heart.

Tripp will see that Claire’s sincerely sorry and truly wants a future with him. He’ll decide to give her another shot, so they’ll start their relationship up again in Monday’s DOOL episode. Elsewhere, John Black (Drake Hogestyn) will try to wrap his head around Diana Cooper’s (Judith Chapman) real identity. He was stunned when he recognized her as a face from his past.

Days fans were already speculating that Diana Cooper might actually be Diana Colville (previously played by Genie Francis), who had a romance with John when he thought he was Roman Brady (now played by Josh Taylor). Since Diana just called John by Roman’s name, that seems to be accurate. Of course, Diana and “Roman’s” reunion won’t exactly be heartwarming!