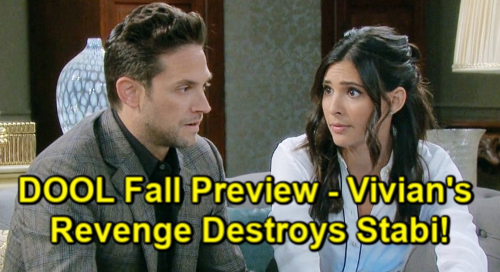 Days of Our Lives (DOOL) spoilers tease that some stunning moments are ahead in Salem. There’s already been plenty of chaos lately, but things are only going to get wilder in the coming months. We’ve got a fall preview for you, so let’s take a look at all the action that’s brewing.

For starters, we should talk about Eric Brady’s (Greg Vaughan) long-awaited reunion with Nicole Walker (Arianne Zucker). Although Eric loves Sarah, she can’t compete with his soul mate. Both Eric and Sarah know this deep down, so they’ll accept it and let this “Ericole” reunion happen. The problem is Sarah will be keeping a huge secret.

Days of Our Lives spoilers say Sarah will be pregnant, but she won’t know if the “baby daddy” is Eric or Rex Brady (Kyle Lowder). Neither option will be appealing! Xander Cook (Paul Telfer) will eventually figure out what Sarah’s hiding, so he’ll want to help. Will Xander offer to pose as the father? That’s not a great option either, but it might be one Sarah’s willing to consider.

Hope Brady Will Not Be Feeling Or Acting Like Herself

Meanwhile, Hope Brady (Kristian Alfonso) won’t feel quite herself. She’ll be stressed and tired due to family issues like Julie Williams’ (Susan Seaforth Hayes) medical crisis along with other hiccups. That’s a reasonable explanation for Hope being out of it, but she’ll get worse as time goes on. Marlena Evans (Deidre Hall) and John Black (Drake Hogestyn) will eventually wonder if there’s more to the story.

Over with Kristen DiMera (Stacy Haiduk), she’ll be a free woman thanks to all her legal maneuvering. Of course, Kristen still won’t have what she really wants, which is Brady Black (Eric Martsolf). Days spoilers say Kristen will hope to change that with a wild new plan, which involves added ammo from Dr. Wilhelm Rolf (William Utay).

Next, Jordan Ridgeway (Chrishell Hartley) will be cleared for release at Bayview. Part of Ben will view this as good news since Jordan’s recovery has gone well. Even so, Ben won’t fully trust his sister. He’ll remain fearful for Ciara Brady (Victoria Konefal), but Rafe Hernandez (Galen Gering) will take legal responsibility for Jordan as she reenters society. At least that’ll offer Ben a little reassurance.

As for Jack Deveraux (Matthew Ashford), he’ll finally be on the verge of getting his memories back. That’s because Jack and Jennifer Horton (Melissa Reeves) will set Dr. Rolf up with a shiny new lab. DOOL fans know Dr. Rolf is quite the eccentric fellow. His mission to make a new-and-improved memory serum will certainly be an interesting one.

Other Days of Our Lives spoilers say Anna DiMera (Leann Hunley) will fight to clear Tony DiMera’s (Thaao Penghlis) name. She’ll be busy while Vivian Alamain (Robin Strasser) drags Stefan DiMera (Brandon Barash) into her revenge on Kate Roberts (Lauren Koslow). Gabi DiMera (Camila Banus) won’t be on board with their plans, so that’ll bring some “Stabi” conflict and a terrible choice.

Vivian’s wrath will ultimately leave Kate in a fight for her life, so expect Lucas Horton (Bryan Dattilo) to come rushing home. It turns out Lani Price (Sal Stowers) has a crisis of her own headed her way. There’ll be some on-duty drama that puts Lani and Eli Grant’s (Lamon Archey) wedding in jeopardy.

It sounds like this fall will be packed full of excitement. We’ll give you updates as other Days details emerge. Stay tuned to DOOL and don’t forget to check CDL often for the latest Days of Our Lives spoilers, updates and news.