Days of Our Lives Spoilers: DOOL Fans Weigh In On Stefan DiMera – Do You Prefer Brandon Barash or Tyler Christopher? 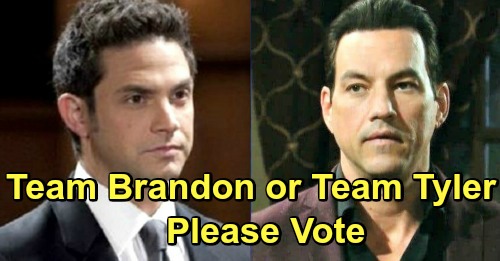 Days of Our Lives (DOOL) spoilers tease that Stefan DiMera (Brandon Barash) will continue to shake up Salem. Now that Brandon Barash has had some time to settle into the role, we want to know what you think. Do you prefer Barash’s version of Stefan or do you miss Tyler Christopher in the part? Both actors have plenty of fans, so let’s compare these Stefans and try to pick a favorite.

Christopher was once quite popular in the role of Nikolas Cassadine over on General Hospital. Barash was also on GH as Johnny Zacchara once upon a time. It’s safe to say some of their fans carried over to their new roles on Days, but we have to judge them based on how they portray Stefan. They bring very different qualities to the table.

Christopher was more believable as a sinister DiMera. He could definitely pull off Stefan’s ruthless side, but that also made it harder to connect in the softer moments. Barash, on the other hand, has more of a boyish charm about him. He’s not as convincing as a menacing villain, but he seems to be more viable in the romance department.

However, Christopher arguably had a bit more chemistry with Nadia Bjorlin (Chloe Lane) than Barash does. They were really starting to gain some appeal right before the switch happened. Thankfully, Barash seems to have tons of chem with Camila Banus (Gabi Hernandez). “Stabi” is already sizzling, which is great news since Days is setting them up as the pairing to root for.

On Twitter, DOOL viewers have been weighing in on which Stefan is their fave. “Catching up on #Days and I swear Brandon Barash is the best thing to happen to the character of Stefan,” one fan said. “The man is freaking adorable!” Another Days of Our Lives watcher suggested that Barash “is missing the edginess n hint of danger Tyler had.”

Of course, some people love them both and just can’t choose. One fan admitted, “I loved Tyler Christopher…But I was pleasantly surprised that I Am enjoying Brandon very much indeed!!!” Another one suggested, “Tyler christopher was great but the new stefan is…awesome.” It’s clear that both are fine actors, so it’s easy to see why so many viewers are torn.