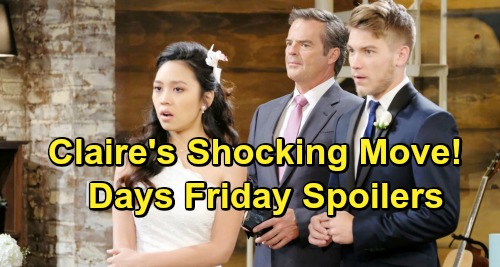 Days of Our Lives (DOOL) spoilers for Friday, April 12, tease that Ciara Brady (Victoria Konefal) will provide some comfort. Lani Price (Sal Stowers) only sees a serial killer when she looks at Ben Weston (Robert Scott Wilson), so she’s not keen on letting him hang out with his nephew. She’s been on babysitter duty and wants to protect David from any threats – including his once murderous uncle.

Ben is on the right track now, but he gets why Lani’s reluctant to let him see the baby. He enjoyed a few moments with the kid in Thursday’s DOOL episode, but spending any lengthy amount of time with David isn’t an option. That could change later, but Ben will remain disappointed on Friday. Even though he understands his past is always going to haunt him, it doesn’t make it any easier.

Days of Our Lives spoilers say Ciara will console Ben and eventually get a surprising request. Ben will ask Ciara to come back to his place and stay for the night. Naturally, Ciara will get the idea. She’ll realize Ben’s wondering if she’s ready to take the leap and make love for the first time. Ciara has seemed ready for a while now, so she should accept Ben’s invite without hesitation.

Other Days spoilers state that Claire Brady (Olivia Rose Keegan) will take matters into her own hands. Armed with a new recording, Claire will burst in Haley Chen’s (Thia Megia) wedding to Tripp Dalton (Lucas Adams).

She’ll be ready to play the proof and destroy this marriage sham, but will she actually do it? That seems like a surefire way to lose Tripp, so Claire really needs to think this through.

Over with Jack Deveraux (Matthew Ashford), he’ll tell Jennifer Horton (Melissa Reeves) he’s marrying Eve Donovan (Kassie DePaiva) and that’s that. Days of Our Lives spoilers say Jack will keep his word when he ties the knot with Eve on next week’s new epsiodes, April15-19. Jennifer will worry that she’s lost Jack forever, but we have faith that Jack and Jenn’s future is still bright.

It sounds like Jennifer will just have to wait for the real Jack to reappear and renew their love. We’ll give you updates as other Days news comes in. Stick with DOOL and don’t forget to check CDL often for the latest Days of Our Lives spoilers, updates and news.