Days of Our Lives Spoilers: DOOL Preemption Schedule – What to Expect During Week of November 18-22 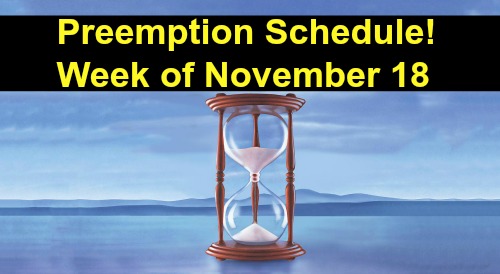 Days of Our Lives (DOOL) spoilers reveal that ongoing impeachment hearings coverage could bring preemptions during the week of November 18-22. Of course, we should note that Days aired as usual during last week’s hearings. Unlike the other soaps, DOOL released new episodes every day like they always do. That could indicate that Days of Our Lives will do the same in the week ahead.

However, there are no guarantees, so it’s best to be prepared for anything! We’ve got the impeachment hearings schedule to pass along, so you’ll know which days could be affected and which ones will definitely have new episodes.

On Monday, November 18, DOOL viewers don’t have to worry about any preemption chances. There won’t be a hearing, which means a new episode will indeed air. Days of Our Lives spoilers say Marlena Evans (Deidre Hall) will toss “Hope Brady” aka Princess Gina (Kristian Alfonso) out while Stefano DiMera (last played by the late Joseph Mascolo) agrees to meet with Chad DiMera (Billy Flynn). Stefano will just have one mysterious condition…

Thursday, November 21, will bring just one round of testimony. Still, it’s worth keeping in mind as a possible preemption day. As for Friday, November 22, no preemptions will affect Days of Our Lives. The impeachment hearings coverage will have wrapped up for the week, so DOOL viewers will be treated to a brand-new episode.

Again, last week went off without a hitch. Days aired their episodes just fine, so that trend may continue during the week of November 18-22. We’ll give you updates as Days news comes in. Stay tuned to the DOOL and don’t forget to check CDL often for the latest Days of Our Lives spoilers, updates and news.