Days of Our Lives Spoilers: Mickey Is Kristen and Brady’s Stolen Baby – Crushing Blow for Sarah, Can She Ever Forgive Xander? 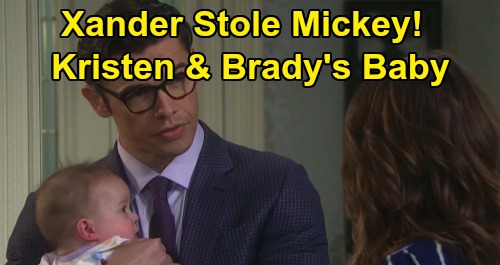 Days of Our Lives (DOOL) spoilers reveal that Xander Cook (Paul Telfer) and Sarah Horton (Linsey Godfrey) will do some family bonding. During the week of November 18-22, Xander and Sarah will share some sweet moments as they gush over Mackenzie “Mickey” Horton. They both adore that little girl, but DOOL fans know Xander isn’t truly her father.

Of course, there’s a good chance Sarah isn’t Mickey’s mother either! Brady Black (Eric Martsolf) has been dealing with plenty of pain since his baby died, but is that baby really gone? It’d doubtful. Based on the latest Days of Our Lives clues, it certainly seems like a swap went down. Let’s consider how this most likely played out.

First, we’ve got Xander, who fell hard for Sarah and desperately wanted a future with her. Xander got lucky when Sarah went along with his fake “baby daddy” claims. It gave him the opportunity to stay in Sarah’s life and connect with her over this child.

However, life can be cruel in Salem – and it definitely was on that “horrible night” Sarah mentioned. That was the night Mickey was born, so tells us something big went down. Something big like a baby swap!

With that in mind, Xander had to do something else as part of the deal. Did Victor convince Xander to switch Sarah’s dead baby with Kristen DiMera’s (Stacy Haiduk) perfectly fine one? Victor would have several reasons to order that swap. For starters, Victor wouldn’t want Maggie Kiriakis (Suzanne Rogers) to lose a grandchild. He’d know how hard it would be for Maggie to watch Sarah grieve, too.

Furthermore, the last thing Victor wanted was a permanent tie between Kristen and Brady Black (Eric Martsolf). This seems like a win-win situation for Victor. He could save Maggie and Sarah from heartache while destroying “Bristen’s” baby bond. You can even throw in one more win since Titan is thriving under Xander’s leadership. Everything about this baby swap plot appears to have worked out in Victor’s favor.

It hasn’t been confirmed that Victor and Xander were in cahoots on this, but it all adds up. If it’s true, Xander’s baby-swapping decision is bound to blow up in his face. During the week of November 25-29, Days of Our Lives spoilers say Xander will declare love for Sarah. He’ll try to make Sarah understand just how much she means to him. Thanks to Xander’s efforts to save kidnapped Mickey, Sarah may let herself love him back.

If Mickey is actually Brady and Kristen’s daughter, she’ll inevitably be ripped away down the road. Can Sarah ever forgive Xander? Will Xander destroy his chances with Sarah or can he overcome his baby blunder? We’ll give you updates as other Days news comes in. Stick with DOOL and don’t forget to check CDL often for the latest Days of Our Lives spoilers, updates and news.