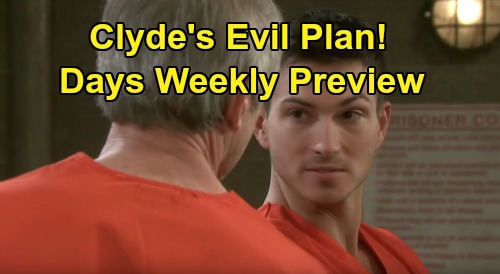 Days of Our Lives (DOOL) spoilers tease that viewers are in for some exciting episodes ahead. The new DOOL promo for the week of November 18th promises answers to something that viewers have been scratching their heads about since the time jump – How exactly did Adrienne Kiriakis (Judi Evans) die? Viewers know that Justin Kiriakis (Wally Kurth) is now in a relationship with Kayla Johnson (Mary Beth Evans), but how’d he become a widower?

But first, let’s address a couple other aspects of the promo. As DOOL viewers know, Eve Donovan (Kassie DePaiva) is in prison for a crime she didn’t commit. She was found guilty of pushing Jennifer Deveraux (Melissa Reeves) over the balcony at the bistro, when viewers know it was really Princess Gina Von Amberg (Kristian Alfonso) who committed the crime.

Eve’s shown in the promo insisting that she was set up, but will anyone listen? According to DOOL spoilers, Eve will summon Abigail DiMera (Kate Mansi) to the prison, where she’ll want the Salem Spectator reporter to do a little digging and prove that she’s innocent of the crime. Abby may not be willing to listen to the person who she thinks caused her mom’s coma at first, but it seems that Eve may get through to her.

After all, Eve will probably argue that Jennifer’s actual attacker is still out there running free, and that may unnerve Abby enough to do a little sleuthing. We’ll see where this all goes, but it seems that Abby will look into things a bit deeper.

Next, Ben Weston (Robert Scott Wilson) is shown in the promo speaking with his dad Clyde Weston (James Read) inside the prison. As DOOL viewers probably remember, Clyde has been in Statesville for a while now, so it seems inevitable that he’d run across his son who’s in the same prison. Ben’s shown insisting to his father that he “didn’t do it,” and they’re likely talking about Jordan Ridgeway’s (Chrishell Hartley) murder.

It seems that Ben will share with his father who he suspects is responsible for Jordan’s murder – Xander Kiriakis (Paul Telfer). But Days of Our Lives spoilers say this will lead Clyde to do something horrible and arrange for the kidnapping of Sarah Horton’s (Linsey Godfrey) baby, all as a vehicle to get Xander to confess to the crime. It sounds like it will be a big mess, and a terrible situation for both Sarah and Xander.

Now, back to the issue of Adrienne’s death. As DOOL viewers know, Will Horton (Chandler Massey) is currently in Statesville doing time for killing Adrienne. But as of yet, it hasn’t been stated on the show exactly what happened. But thanks to a leaked Australian episode that aired early, we know that an accident took Adrienne’s life, and that she died of massive internal injuries. The episode also revealed that Will stood trial for Adrienne’s death.

So, it seems likely that Will was behind the wheel when he was involved in an accident involving Adrienne. Of course, whether they were in the same vehicle or separate vehicles remains to be seen, or perhaps Adrienne was even a pedestrian at the time of the accident. But was Will driving drunk? Or could it have been a case of distracted driving, perhaps texting while driving?

DOOL viewers should get answers to these questions this week, since the promo appears to show flashbacks to what happened shortly after the accident, when Kayla had to give Justin the grim news that Adrienne didn’t survive her injuries. The promo shows Kayla telling Justin that “we did everything we could,” while Justin reels in horror.

It looks like viewers will be in for another big week of reveals and action as we head into the second post time jump week, so stay tuned! We’ll give you updates as DOOL news comes in. Stick with the NBC soap and don’t forget to check CDL often for the latest Days of Our Lives spoilers, updates, and news.