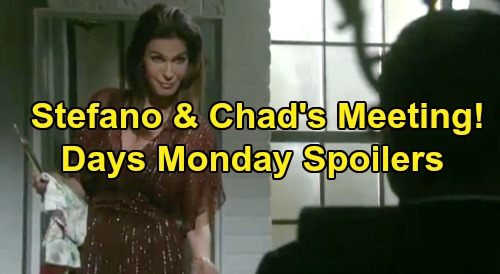 Days of Our Lives (DOOL) spoilers for Monday, November 18, tease that John Black (Drake Hogestyn) and “Hope Brady” aka Princess Gina have some explaining to do. Marlena Evans (Deidre Hall) just showed up to find “Hope” in a rather compromising position. Princess Gina decided to give John a nudge toward what she’s certain he wants. She spilled wine on her top so she could remove it, so Marlena’s going to have some questions.

However, Marlena loves and trusts John, so she won’t cause a big fuss. It won’t be long until John and Marlena are canoodling in front of Princess Gina, so she’ll struggle to hide her displeasure. Days spoilers say John will express confusion over the surprise. He’ll point out that Marlena wasn’t due back until Christmas, but she’ll inform him that she worked it out and can now complete her residency in Salem.

Of course, that’ll bring a real snag for Princess Gina, who moved in with John after an alleged flood at her house. Marlena will make it clear to “Hope” that she’d like some alone time with her husband. She won’t think John needs a roommate, so Princess Gina will have to find another way to get closer to him. She’ll call Stefano DiMera (last played by the late Joseph Mascolo) and let him know they need a new plan.

Across town, Kayla Johnson (Mary Beth Evans) and Justin Kiriakis (Wally Kurth) will recall some painful memories as well as some pleasant ones. Justin will remember Kayla telling him Adrienne Kiriakis’ (Judi Evans) internal injuries were too severe following her accident. There’ll be a flashback of Justin breaking down in tears as he learns Adrienne is dead.

Next, Justin and Adrienne will recall leaning on each other in the six months since the accident. They’ll talk about how their romance kind of snuck up on them. It was like they were dating without even knowing it. There’ll also be a flashback of Kayla receiving signed divorce papers from Steve Johnson (Stephen Nichols). In that flashback, Kayla will marvel at how she hasn’t spoken to Steve in over a year. Now Steve’s signed his name – and “just like that” – it’s over.

Other Days of Our Lives spoilers say Sonny Kiriakis (Freddie Smith) will confide in Evan Frears (Brock Kelly). Since Evan ordered too much food, he’ll urge Sonny to have a picnic with him in the square. They’ll eventually discuss Sonny’s feelings about Will Horton (Chandler Massey) and his role in killing Adrienne. Sonny will admit he’s angry with Will, and he won’t know if he can get past the destruction Will’s caused.

As their chat wraps up, Sonny will thank Evan for listening to him ramble. They’ll joke about getting together for a karaoke and football night combo sometime, so Sonny will hope to convert Evan to his favorite team. In the prison visiting area, Kate Roberts (Lauren Koslow) will sit down with Will and do her best to comfort him. She’ll insist Adrienne’s death was an accident and suggest that Sonny could forgive Will in time.

Will will have a flashback of encouraging Sonny to stay away. He’ll feel like Sonny can’t even make eye contact after what happened. Back in the present, Kate will assure Will that he’s not a killer like Ben Weston (Robert Scott Wilson). However, Will’s still the reason Adrienne is dead, and he won’t be sure he can forgive himself for that.

Over with Chad DiMera (Billy Flynn) and Abigail DiMera (Kate Mansi), they’ll argue about their communication with Stefano. DOOL spoilers say Stefano will send Abigail a reply to her recent message. He’ll wonder why she’s poking in her husband’s affairs, so Abigail will nearly reply with a harsh response.

Chad will warn Abigail not to send it as Jack Deveraux (Matthew Ashford) arrives. They’ll cover up what they were really bickering about before Abby chats with her dad. Jack and Abigail will talk about how she’s his star reporter at The Spectator now. In fact, Abigail’s currently chasing a hot story. Jack will inquire about it, but Chad will interrupt before she can spill anything about Stefano.

Once Jack’s gone, Days of Our Lives spoilers say Chad and Abigail will argue again. He’ll convince her to write a gentler reply since they don’t want Stefano to disappear again. Abigail will respectfully request that Stefano meet with Chad in person, so Stefano will write back to agree to it – on one condition…

It sounds like an action-packed episode’s coming up. We’ll give you updates as other Days news emerges. Stay tuned to DOOL and don’t forget to check CDL often for the latest Days of Our Lives spoilers, updates and news.