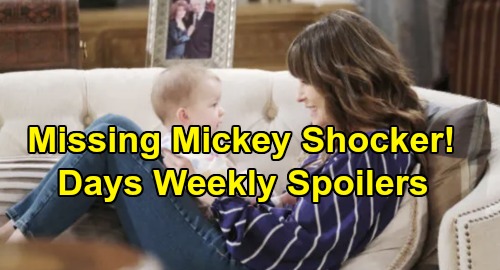 Days of Our Lives (DOOL) spoilers for the week of November 18-22 tease that the excitement’s about to rev up in Salem. First, let’s talk about Sonny Kiriakis (Freddie Smith) and his new confidant. He’ll open up to Evan Frears (Brock Kelly) about his complicated relationship with Will Horton (Chandler Massey) and the situation he now finds himself in. Part of Sonny will always love Will, but it’s tough for him to look Will in the eyes and not see Adrienne Kiriakis’ (Judi Evans) killer.

Will has alluded to a mistake he wishes he could undo. He regrets accidentally taking Adrienne’s life, but he can’t change the past. Kate Roberts (Lauren Koslow) will visit Will in the week ahead and try to give him a pep talk. She won’t want Will to give up on the idea of Sonny forgiving him, but Will will wonder if he can even forgive himself.

Other Days of Our Lives spoilers say Ciara Brady (Victoria Konefal) will do some snooping. She’ll dig around Xander Cook’s (Paul Telfer) office and hope she can find evidence that could help Ben Weston (Robert Scott Wilson). Ciara has a hunch that Xander murdered Jordan Ridgeway (Chrishell Hartley) in exchange for the CEO gig at Titan, but there’s a good chance that hunch is incorrect.

However, that won’t stop Clyde Weston (James Read) from taking matters into his own hands. He’ll have one of hit outside lackeys kidnap Mackenzie “Mickey” Horton and refuse to give her back unless Xander confesses. Sarah Horton (Linsey Godfrey) will reel when she discovers her baby’s missing, and it won’t be long until Xander’s giving “Hope Brady” aka Princess Gina (Kristian Alfonso) his confession.

As for Clyde, he’ll decide to hang onto Mickey for a little longer and hopefully score his freedom. That’ll leave Ben Weston (Robert Scott Wilson) in a frenzy, but there’s nothing he can do in a cell across from Clyde. Ciara will have to take the lead on this – and she’ll indeed leap into action soon enough.

Over with Abigail Deveraux (Kate Mansi), she’ll meet with Eve Deveraux (Kassie DePaiva) and listen to her pitch. Eve will plead with Abigail to find out who really pushed Jennifer Horton (Melissa Reeves) off that balcony. It’ll take some convincing, but Abigail will ultimately get on board. She’ll want the truth – just like she’ll want the truth when she catches Eli Grant (Lamon Archey) red-handed.

Eli will be looking around on Chad DiMera’s (Billy Flynn) laptop when Abigail walks in. She’ll demand some answers, but Eli will do his best to wiggle out of his jam. Elsewhere, Days of Our Lives spoilers say Nicole Walker (Arianne Zucker) will get a sweet surprise from Eric Brady (Greg Vaughan). It’ll mean great news for the lovebirds, but Jenn will face a crushing blow across town.

Jennifer should get updates on Adrienne’s death as well as Haley Chen’s (Thia Megia). She’ll fret about everything she’s missed and wish she could’ve been there during her family’s losses. Days fans can expect more twists and turns as DOOL’s time jump storylines press on!

It sounds like some fantastic episodes are coming up, so stay tuned. We’ll keep you posted as other Days details emerge. Stick with DOOL and don’t forget to check CDL often for the latest Days of Our Lives spoilers, updates and news.