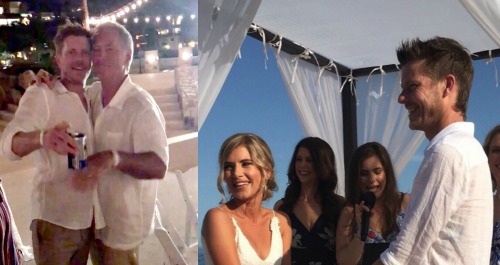 Days of Our Lives (DOOL) spoilers has some great news to pass on about the son of a fan-favorite DOOL star. Drake Hogestyn, who portrays John Black on the NBC soap, has shared on social media that his son Ben Hogestyn got married.

As DOOL fans may know, Drake is quite active on social media, and he shared some photos and updates on Twitter about the wedding, which took place at the beach. Drake posted a photo of the ceremony as it was taking place, with both bride and groom smiling big and clearly thrilled on their wedding day.

His caption reads: “Woohoo Ben!! Congratulations Son…and WELCOME TO THE FAMILY Danica! We love you!” Later, he posted a short video showing some of the reception festivities and said: “Cheers to the first page of an amazing new chapter in your life kids! Let the party begin…”

Fans and Drake’s fellow soap colleagues have been steadily replying to his tweets and offering their congratulations on the happy event. Alison Sweeney (Sami Brady, DOOL) replied with “Congrats!!!” And another of Drake’s followers responded with: “Congratulations to your son and daughter-in-law, may they have many happy memories together.”

You may remember Ben Hogestyn from his former soap roles. He portrayed Lucas Jones on GH from 2005-2006, Harry Jackson on B&B in 2006, and a gang member on DOOL back in 2002. He’s also appeared in guest roles on several other TV series, including Ghost Whisperer, Cold Case, and Entourage.

Ben also has his own accessories and clothing company, “Ben Hogestyn Malibu.” He specializes in creating one-of-a-kind exotic and leather handbags, sewing and constructing the bags completely by hand.

Ben’s new bride, Danica Stewart, is an actress as well. She portrayed Jessica Bennett on Passions from 2003-2008, and Maxie Jones on GH back in 2002. She’s also appeared on CSI: Miami, Heroes, and Crossing Jordan, among other TV series.

Our heartfelt congratulations go out to Ben and Danica, and to the entire Hogestyn family! Stay tuned to DOOL and don’t forget to check CDL often for the latest Days of Our Lives spoilers, updates, and news.

Cheers to the first page of an amazing new chapter in your life kids! Let the party begin… pic.twitter.com/ql8Yas6c2I