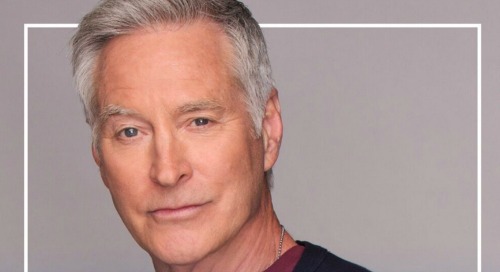 Days of Our Lives (DOOL) spoilers has some great news to pass on about a popular DOOL star. Drake Hogestyn, who portrays John Black on the NBC soap, has recently expanded his social media presence for his fans. As you may know, Drake has been active on Twitter for some time now, and he frequently shares updates about his life and what he and his family are up to.

As you might remember, over the summer Drake posted a video on Twitter about his son Ben Hogestyn’s wedding. Drake was thrilled to share the festivities with his fans, and his fans loved seeing the update and seeing Drake and his family happy and celebrating.

Well, Drake recently joined Instagram as well, and he got an assist from his son Ben for his very first post. Drake posted a video of himself that Ben took. In the video, Drake looks to be reviewing some Days of Our Lives scripts with his French Bulldog, George, sitting on his lap.

It seems that Ben surprised Drake by taking the video, while Drake cutely protested to the impromptu situation. George the bulldog enjoyed the situation and Drake’s good-natured protests, as he licked Drake’s face. Drake posted the video along with the following caption: “Studying with my buddy George…:)”

Drake’s fans have been replying steadily to his very first Instagram post, with most thrilled beyond belief that Drake has jumped on the Instagram bandwagon. Eric Martsolf, who portrays Drake’s TV son Brady Black, commented on his post as well. Eric said: “You did it! Welcome my tv father and friend to the circus!”

Hopefully, Drake will get active on Instagram and continue to post what he’s up to. Fans love to see their favorite stars studying scripts and interacting with their pets and just acting like regular people. Drake seems like a very down-to-earth guy, so fans will be watching and waiting for future updates!

Will you be following Drake’s new Instagram feed? Stay tuned to DOOL and don’t forget to check CDL often for the latest Days of Our Lives spoilers, updates, and news.