Days of Our Lives Spoilers: Drunk Maggie Comes Fact-to-Face With Kristen – But Will Brady Believe Her Tall Tale?

BY hellodrdavis on May 27, 2019 | Comments: one comment
Related : Days of Our Lives, Soap Opera, Spoiler, Television 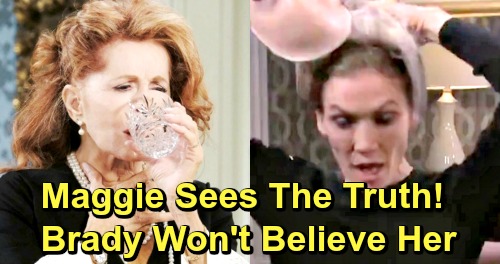 Days of Our Lives (DOOL) spoilers tease that Maggie Kiriakis (Suzanne Rogers) will be in for a big shock. As DOOL viewers know, Maggie recently fell off the wagon. After burying her granddaughter Holly Jonas (Harlow and Scarlett Mallory) and getting blamed for the toddler’s death by Nicole Walker (Arianne Zucker), Maggie drank too much vodka and passed out on the Kiriakis couch.

Brady Black (Eric Martsolf) ended up finding Maggie and escorted her upstairs for a nap. But according to Days of Our Lives spoilers, Maggie won’t remain in her room for long. It appears that she’ll manage to sneak out and go to confront Nicole in her drunken state. What she’ll hope to accomplish by talking to Nicole isn’t clear, but she won’t be thinking rationally due to the liquor.

As it happens, Maggie will arrive at Nicole’s hotel room door right after Xander Cook (Paul Telfer) leaves. Of course, viewers know that the “Nicole” who has returned to Salem is actually Kristen DiMera (Stacy Haiduk) wearing a mask. Well, when Maggie knocks on Nicole’s door, Kristen will answer thinking it’s Xander, and she won’t be wearing her Nicole mask. That means Maggie will come face-to-face with Kristen!

Nicole will promptly shut the door in Maggie’s face, leaving a still-drunk Maggie confused and unsure about what she saw. Meanwhile, Kristen will put her Nicole mask back on and re-open the door as Nicole, totally confusing Maggie. And once Kristen sees that Maggie is inebriated, she’ll manipulate the situation and make it seem like Maggie was seeing things when Maggie insists that she just saw Kristen’s face.

It will be a real mess, and Maggie will wind up as confused as ever. But since she’s drunk, she won’t be able to make sense of any of it. Unfortunately, it looks like Maggie will keep drinking from there, which won’t help matters any.

Eventually, DOOL spoilers say that Maggie will catch up with Brady and attempt to fill him in on what she witnessed. But since Brady will know that Maggie has been drinking heavily and is confused, he’ll probably just chalk her “vision” of Kristen up to being a drunken hallucination. Or will he?

Brady may dismiss Maggie’s tale at first, but if Brady really gives the matter some thought, he might start to put two and two together. After all, it’s now been revealed that several people survived the Nashville warehouse fire.

There’s Xander, Jack Deveraux (Matthew Ashford), and the person who everyone believes is Nicole. If he thinks critically about the situation, he might start to realize that Maggie may have actually seen the one and only Kristen.

Do you think Brady will dismiss Maggie’s sighting of Kristen as a tall tale, or will he believe her? Stay tuned to DOOL and don’t forget to check CDL often for the latest Days of Our Lives spoilers, updates, and news.