BY Heather Hughes on May 27, 2019 | Comments: 3 comments
Related : Days of Our Lives, Soap Opera, Spoiler, Television 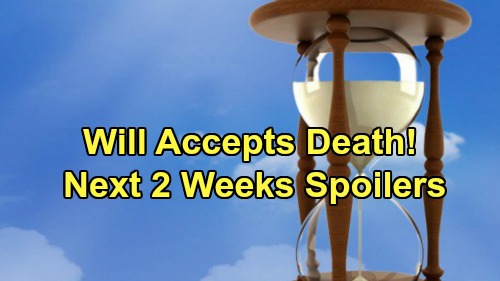 Days of Our Lives (DOOL) spoilers for the next two weeks tease that several Salemites will get clues. During the week of May 27-May 31, DOOL will be preempted on Monday, May 27. The drama will heat up again on Tuesday when Dr. Rex Brady (Kyle Lowder) and Dr. Sarah Horton (Linsey Godfrey) tackle a challenge. They’ll look through Rex’s notes from when he did research with Dr. Wilhelm Rolf (William Utay).

Sarah and Rex will hope for any little hint that might help Will Horton (Chandler Massey). Unfortunately, they’ll come up empty while Will rapidly declines. After some moments of forgetfulness, Will’s mood swings will be on full display again. He’ll end up blasting Hope Hernandez (Kristian Alfonso) and Ted Laurent (Gilles Marini) for a flimsy reason.

Other Days of Our Lives spoilers say Kristen DiMera (Stacy Haiduk) will get caught in a tight spot. An intoxicated Maggie Kiriakis (Suzanne Rogers) will show up shortly after Xander Cook (Paul Telfer) leaves. In the confusion, Maggie will see that Nicole Walker (Arianne Zucker) isn’t quite herself! Kristen will don the mask again and cover her blunder, but trouble is obviously brewing once more clues pile up.

During the week of June 3-7, Will and Sonny Kiriakis (Freddie Smith) will accept what they can’t change. They’ll be told there’s no hope for Will, so they’ll come to grips with Will’s imminent death. Thankfully, Will isn’t really going to die, but that won’t stop him from thinking he is and wishing for more time.

Over with Eli Grant (Lamon Archey), he’ll get fed up with Lani Price (Sal Stowers). Eli will feel like Lani’s life revolves around a baby that isn’t hers. He’ll wish Lani would just let Rafe Hernandez (Galeng Gering) take care of David Ridgeway like he promised, but Lani will insist on helping. They’ll get into an argument, which will bring a breakup by the end of it. Days spoilers state that Lani will get dumped!

Next, Stefan DiMera (Brandon Barash) will explode at Gabi Hernandez (Camila Banus). Despite repeated attempts to get through to Chloe Lane (Nadia Bjorlin), she just won’t be interested. Since Chloe spotted Gabi and Stefan in bed together, that’s not an image she can truly shake.

Stefan will blame Gabi the destruction of his budding romance with Chloe, but Gabi will just use this to draw him closer. Meanwhile, Days of Our Lives spoilers say Claire will believe Tripp Dalton (Lucas Adams) is running away with Haley Chen (Thia Megia). She naturally won’t stand for that, so she’ll decide to burn the Horton cabin down with Haley and Tripp inside!

After undergoing hypnosis, Ben will recall one last memory from the night of the of the blaze. It’ll be a ringtone that becomes familiar soon enough. That ringtone will belong to Claire, so Ben will want to confront her about her actions.