BY Heather Hughes on May 26, 2019 | Comments: one comment
Related : Days of Our Lives, Soap Opera, Spoiler, Television 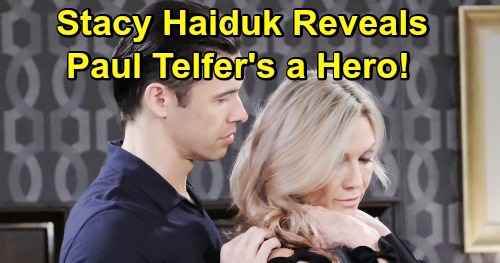 Days of Our Lives (DOOL) spoilers reveal that Stacy Haiduk is back for her latest run as Kristen DiMera. She had big shoes to fill when she took over the role, which was previously played by Eileen Davidson. However, DOOL was pleased with Haiduk’s portrayal and promised she’d ultimately be part of another storyline.

In the new issue of Soap Opera Digest, Haiduk talked about her last stint at Days as well as her current one. Before Haiduk stepped in as a Kristen recast, the roles had dried up and she was out of options. Haiduk actually worked as an Uber driver for a while until she scored the part of Kristen.

That’s why she got nervous when DOOL took a little too long calling her back for another round! Haiduk wanted to keep acting and fortunately, she did. She filmed a movie in between Days of Our Lives stints, but she was still worried the call would never come.

“I was like, ‘I want so much to go back. Please, I need to hear something soon,’” Haiduk said. “This was in October. I didn’t know what I was going to do. The next day, I got the call from my agent and I was literally in tears.” Once Haiduk got confirmation, she was ready to get back down to business. She was eager to work with the Days cast and crew once again.

Of course, this storyline is a wild one! What did Haiduk think when she read the scripts and realized Kristen would be posing as Nicole Walker (Arianne Zucker)? “It was confusing,” Haiduk said. “But I love Mission Impossible and that whole scenario that they did in it.”

Haiduk also noted she had to be covered in “goop” along with Zucker to make the face masks. Days of Our Lives fans were treated to a fun cliffhanger on May 24 that showed them off. As for the actors Haiduk has worked with, she couldn’t be more pleased. Haiduk praised Zucker, Eric Martsolf (Brady Black) and Suzanne Rogers (Maggie Kiriakis) for being so wonderful.

She also had kind words for Paul Telfer (Xander Cook). “He’s been my savior,” Haiduk admitted. “I was only in scenes with him most of the time in the beginning, and I had tons and tons of dialogue.” Telfer always offered to go over the scenes over and over, so Haiduk insisted that he was her “hero with that.”