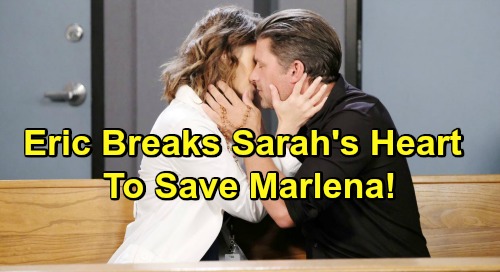 Days of Our Lives (DOOL) spoilers tease that Eric Brady (Greg Vaughan) will battle guilt after Sarah Horton (Linsey Godfrey) plants a kiss. He’ll struggle to cope with his mom’s terrible ordeal, so Sarah will offer comfort. Unfortunately, the emotional moment will lead to a tight spot and a difficult decision.

Dr. Marlena Evans (Deidre Hall) nearly died after getting shot at her own wedding and being taken off life support. She wouldn’t have survived without John Black’s (Drake Hogestyn) desperate plan. That’s why Eric will be a mess when Marlena’s once again in a coma and facing death. He’ll hate that an allergic reaction has put Marlena back in this awful situation.

Eric’s vulnerable, sensitive side will make Sarah even more attracted to him, so it won’t be long until their lips are locking. Days of Our Lives spoilers say Brady will spot the kiss, which means a fierce outburst is brewing. He’ll rip into Eric for making moves on Sarah, but it’ll really be Sarah who’s doing most of the move-making.

Nevertheless, Eric will regret letting his feelings for Sarah grow. He won’t want to hurt Rex Brady (Kyle Lowder) or wreck the life Sarah could have with him. DOOL spoilers state that Eric will try to put his own feelings aside. He’ll obviously want to be with Sarah, but he’ll promise to stay away from her – IF he gets something in return.

Days of Our Lives spoilers say Eric will make a vow to God. This former priest will pray for Marlena’s miracle and hope he gets the answer he’s seeking. Eric will pledge to steer clear of Sarah if Marlena’s life is saved. That’s all he’ll be worried about in these distressing moments for his family.

Since we know Marlena isn’t going anywhere, Eric will realize he has to follow through on his promise. Marlena will survive, so Eric will want to keep his end of the bargain. Of course, there’s a good chance Eric’s willpower will fade soon enough. Days spoilers hint that Eric and Sarah will get together just in time for Nicole Walker’s (Arianne Zucker) comeback starting April 25.

It sounds like Eric’s love life will get even more complicated in the coming months. We’ll give you updates as other Days news emerges. Stick with DOOL and don’t forget to check CDL often for the latest Days of Our Lives spoilers, updates and news.