Days of Our Lives Spoilers: Eve and Vivian Bond Over Losing a Child – Will They Leave Salem Together?

BY hellodrdavis on October 6, 2019 | Comments: one comment
Related : Days of Our Lives, Soap Opera, Spoiler, Television 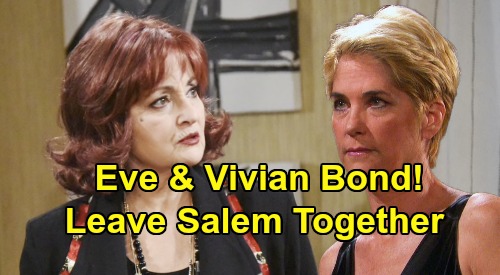 Days of Our Lives (DOOL) spoilers tease that Vivian Alamain (Robin Strasser) will have a difficult decision to make. As DOOL viewers know, after sneaking into the hospital disguised as a doctor, she learned that her son, Stefan DiMera (Brandon Barash), is brain dead. Of course, she’s horrified and distraught by the news, but she’ll need to act fast if she’s going to escape from the authorities.

The one thing that Vivian doesn’t want is to be behind bars, so according to DOOL spoilers, she’ll take off. Of course, once she knows that Stefan is beyond being saved, she’ll probably want to honor his final wishes and go on the run, just as he told her to do in the moments after he was shot. It will be a tough decision for her to make, but she’ll know that she really has no other choice.

Days of Our Lives spoilers say that Vivian will indeed flee, but she’ll soon run into a friendly face…Eve Donovan (Kassie DePaiva). Vivian and Eve previously met and bonded when Eve came to the DiMera mansion a while back. In fact, Vivian thought that Eve might even be a good woman for Stefan at the time, which totally disgruntled Gabi DiMera (Camila Banus).

Well, it seems that a distraught Vivian and Eve will bump into each other as Vivian is trying to make her way out of town and to the Salem airstrip where there’s a jet waiting for her. Eve will notice that Vivian is upset, and the two will talk. Eve will soon learn that Stefan was shot and is now brain dead, and that will strike a chord with Eve, since she’s also lost a child to an act of violence.

It looks like Eve and Vivian will commiserate over their respective losses, and Eve will offer Vivian her sympathies. Vivian will explain that time is of the essence and that she’s got a jet waiting on her to take her somewhere safe, and this may pique Eve’s interest and get her thinking about leaving Salem as well.

As DOOL viewers know, Eve recently had a conversation with Jack Deveraux (Matthew Ashford), who stated his intentions to divorce her asap while apologizing to her for his actions during their short-lived marriage. Eve isn’t entirely keen on just handing Jack a divorce and allowing him to run off with Jennifer Horton (Melissa Reeves) for a happily-ever after. But fighting the divorce would be a pain, even though it would give her some smug satisfaction.

But what if Eve were to simply disappear and therefore be unable to give Jack the divorce he so desires? Might she just hop on the plane with Vivian and disappear forever, leaving Jack stuck in a marriage and unable to marry Jennifer? It seems pretty likely. There’s no official word that Kassie DePaiva is leaving, but recently CDL reported some news suggesting that she might already be gone from the show.

As you might remember, that news came from Jason47’s Facebook page, and was based on the makeup/hair chart showing all the contract actors, and Jason47 concluded based on his analysis that either Kassie DePaiva or Matthew Ashford was missing from the chart and therefore no longer on contract. Since it seems that Matthew Ashford will be sticking around since Jack just got his memories back, that indicates that Kassie DePaiva will probably be the cast member exiting.

And if that’s the case, it’s entirely possible that Eve might just up and leave with Vivian, in a spur-of-the-moment decision. Vivian could use the support now that she’s lost Stefan, and the whole thing would make sense for Eve, who really doesn’t have anything left in Salem to keep here there.

Do you think that Eve will leave town with Vivian? Stay tuned to DOOL and don’t forget to check CDL often for the latest Days of Our Lives spoilers, updates, and news.