BY hellodrdavis on October 5, 2019 | Comments: one comment
Related : Days of Our Lives, Soap Opera, Spoiler, Television 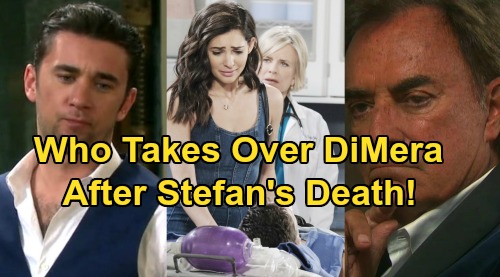 Days of Our Lives (DOOL) spoilers tease that Stefan DiMera’s (Brandon Barash) era at DiMera Enterprises has come to an end. As DOOL viewers know, Stefan has been shot by Lani Price (Sal Stowers) as he was trying to save his mother, Vivian Alamain (Robin Strasser), who was in the line of fire. Of course, the whole thing was Vivian’s fault, as she was about to open fire on Lani, so Lani had no choice but to discharge her weapon.

But the end result will still be the same, and Stefan will be gone. That will leave a lot of sadness and tears for Gabi DiMera (Camila Banus) and Vivian, but aside from the personal losses that Stefan’s death will bring, it will also bring some uncertainty for DiMera Enterprises. Notwithstanding the recent turmoil that resulted in Kate DiMera (Lauren Koslow) being named DiMera CEO, Stefan was the heart and soul of the company.

Now that Stefan will be gone, the board will certainly want to make a wise choice regarding who will be at the helm of the company going forward. Kate’s still in the hospital recovering from her near-death, so she may not be a viable option, at least in the short term. So, who will step up and run the company now?

Well, one option is that Kristen DiMera (Stacy Haiduk) could step up, but she’s had her share of scandals lately, since she recently paraded around Salem as Nicole Walker (Arianne Zucker) and caused a stir. The board probably won’t like that, plus it wasn’t that long ago that Kristen tried to orchestrate the murder of Marlena Evans (Deidre Hall). And Kristen may not even be interested in the job at this point, since her main goal is winning Brady Black (Eric Martsolf) over with her pregnancy.

But what about Tony DiMera (Thaao Penghlis)? It’s been a decade since he was in action at DiMera Enterprises, but the board might want him to step back in and run the company. One wonders if Tony will step in, especially since DOOL spoilers indicate that Tony will soon drop a bombshell on Anna DiMera (Leann Hunely). Might he spring on her that he’s been asked back to DiMera Enterprises? It seems likely, but Anna might not be too happy about that.

In fact, ongoing DOOL spoilers say that ultimately Tony and Anna will leave Salem, so it doesn’t look like Tony would be heading the company for long, if he even accepts the position in the first place. In fact, it looks like he will eventually have to choose between the company and Anna, and his choice will probably be clear, since he adores his beloved Anna more than anything.

Of course, there is another option here, aside from Kristen and Tony. There’s always Chad DiMera (Billy Flynn), who’s currently working at DiMera in Paris. He and Abigail DiMera (Kate Mansi) have been in Paris for several months now, but they’re slated to return to Salem sometime later this year, and that may mean that Chad will be back running DiMera from Salem.

At any rate, the future of DiMera will be in flux for a while, until stable leadership is found, and it looks like it will take some time to get the company settled, so Mr. Shin (Michael Hagiwara) and the board will have a challenge on their hands. Who do you think will end up running DiMera? Stay tuned to DOOL and don’t forget to check CDL often for the latest Days of Our Lives spoilers, updates, and news.