Days of Our Lives Spoilers: Eve Blackmails Haley – But Tripp’s Onto Eve and Claire’s Conspiracy

BY hellodrdavis on May 4, 2019 | Comments: one comment
Related : Days of Our Lives, Soap Opera, Spoiler, Television 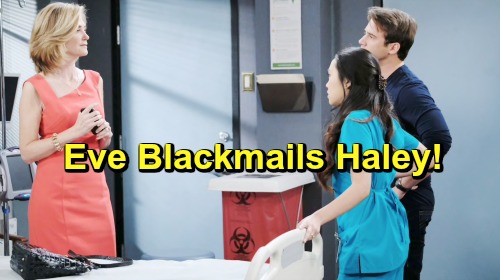 Days of Our Lives (DOOL) spoilers tease that Eve Donovan (Kassie DePaiva) will soon get some bombshell information. As DOOL viewers know, Claire Brady (Olivia Rose Keegan) is unraveling in the wake of Tripp Dalton’s (Lucas Adams) marriage to Haley Chen (Thia Megia). Claire’s terrified that Tripp will eventually fall for Haley, and she feels like she’s completely lost control of the situation.

But in the coming days, Claire will once again ramp up her efforts to get Haley deported. Her previous efforts failed miserably, and she’s been hesitant to do anything too drastic to get Haley deported, because she knows that it will upset Tripp if she does. But Claire is getting to the point where she doesn’t care; she just wants Haley gone.

DOOL viewers know that Claire recently tore Haley and Tripp’s wedding photo in half and burned the “Haley” half in the Kiriakis fireplace. Claire’s really starting to devolve, and Days of Our Lives spoilers say that she’ll again approach Eve for help. It looks like Eve and Claire will once again join forces, as Claire’s desperate to rid herself of Haley.

According to Days of Our Lives spoilers, Claire will soon hand some damaging information over to Eve…a recording of Tripp admitting to Claire that his marriage to Haley is a scam. It looks like Eve will then use that information to blackmail Haley. Eve may demand that Haley end her marriage to Tripp, or else she’ll hand the recording over to ICE.

Of course, Haley won’t want ICE to get hold of that recording, as it will get both herself and Tripp in serious trouble. But if she does what Eve wants and ends the marriage, then at least Tripp won’t face legal action. It looks like this is exactly what will transpire, since DOOL spoilers indicate that Haley will soon make a surprising announcement.

But while all this is going on, Tripp will be conducting an investigation. He happened to notice the wedding photo that Claire destroyed, so he’s going to know that Claire is feeling volatile. Plus, Days of Our Lives spoilers say that Tripp will soon find out that Claire and Eve are in cahoots.

So, that could lead to an interesting situation if Tripp is somehow able to interfere with Eve’s blackmail plot against Haley. Tripp’s pretty sneaky, so he might find a way to get the damaging recording away from Eve. Do you think Tripp will be able to ultimately save Haley from Eve and Claire’s plot? Stay tuned to DOOL and don’t forget to check CDL often for the latest Days of Our Lives spoilers, updates, and news.