BY hellodrdavis on May 3, 2019 | Comments: 2 comments
Related : Days of Our Lives, Soap Opera, Spoiler, Television 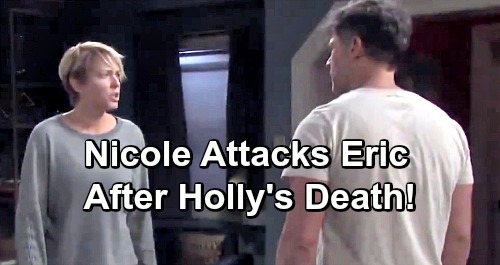 Days of Our Lives (DOOL) spoilers tease that Nicole Walker (Arianne Zucker) will experience total devastation. In the new DOOL weekly video promo, Nicole’s anguish and anger over losing her daughter Holly Jonas (Harlow and Scarlett Mallory) is explored. First, a sweet still of Holly is shown, and Nicole’s voice is heard saying that she just wants her daughter back.

Next, Rafe Hernandez (Galen Gering) is heard saying that there’s been a terrible accident, and rescue workers are briefly shown lifting a small gurney from the accident site. According to Days of Our Lives spoilers, Holly will be riding in a van that ends up going over a precipice and falling a considerable distance to the ground below.

But before Rafe and others can get to the van at the bottom of the ravine, the van will suddenly explode, presumably with little Holly inside. Eric Brady (Greg Vaughan), Nicole, and Hope Hernandez (Kristian Alfonso) will rush to the scene of the accident, but by then it will be too late. Little will remain of the van, and Holly will be presumed dead in the explosion. 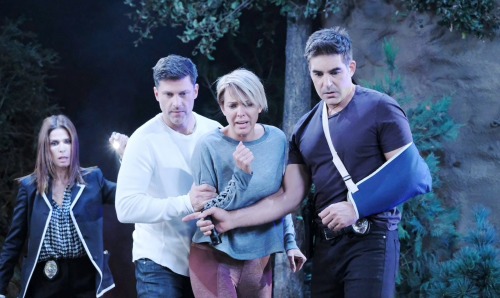 However, there is some good news here. As it turns out, DOOL spoilers say that Holly will not be in the van when it explodes. Exactly how she’ll get out remains to be seen, but the little girl will survive the explosion and remain with her captors – Ted Laurent (Gilles Marini) and Xander Cook (Paul Telfer). Of course, no one but Ted and Xander will know that Holly is alive.

Days of Our Lives spoilers also say that Eric will at first comfort Nicole, who will be completely distraught. He’ll decide that she needs to leave the scene of the accident, so he’ll eventually take her back to his apartment. But Nicole’s anguish will soon turn to anger, and that’s where the DOOL video promo picks back up.

Specifically, Nicole and Eric are shown in Eric’s apartment, where an angry Nicole will berate Eric because he promised to protect Holly. DOOL viewers will recall that before Nicole “died” in the Nashville warehouse explosion, she begged Eric to take care of Holly for her. Now that she believes Holly has perished, she’ll be furious with Eric for not caring for her daughter.

Of course, Eric did try to get custody of Holly at one point after Nicole’s “death,” but a letter allegedly sent by Nicole to Chloe Lane (Nadia Bjorlin) was produced which stated that Nicole wanted Chloe to take care of Holly in the event of her death. Eric ultimately let go of the custody fight and allowed Holly to be in Chloe’s care.

But that’s going to be difficult to explain to Nicole now. The promo shows Nicole physically attacking Eric and yelling at him, “You promised to protect Holly! Why didn’t you do something? Why?”

According to DOOL spoilers, we’ll see Nicole completely reject Eric’s attempts to help as she gets comfort from others, such as Maggie Kiriakis (Suzanne Rogers) and Brady Black (Eric Martsolf), while Sarah Horton (Linsey Godfrey) comforts a distraught Eric.

It certainly looks like we’re in for a heartbreaking and emotional week as Nicole gets the worst news of her life and tries to make sense of what’s happened. Stay tuned to DOOL and don’t forget to check CDL often for the latest Days of Our Lives spoilers, updates, and news.