BY Heather Hughes on May 3, 2019 | Comments: one comment
Related : Days of Our Lives, Soap Opera, Spoiler, Television 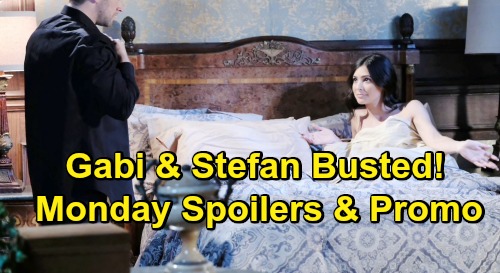 Days of Our Lives (DOOL) spoilers for Monday, May 6, tease that Stefan DiMera (Brandon Barash) will panic when he hears Chloe Lane (Nadia Bjorlin) coming. He’s in his bedroom after hitting the sheets with Gabi Hernandez (Camila Banus) again, so he’ll have to think fast. Stefan still wants a relationship with Chloe, but it could be in jeopardy if she finds out he’s hooking up with Gabi on the side.

Once they get dressed in a hurry, Stefan will try to sneak Gabi out. He’ll hope to get rid of her before Chloe can figure out what happened, but he’ll run into some trouble. DOOL spoilers say Stefan will get busted, so it sounds like Chloe will spot them together and demand some answers.

Meanwhile, Nicole Walker (Arianne Zucker) will struggle to keep it together. She’ll worry about the danger Holly Jonas (Harlow and Scarlett Mallory) is in, so Brady Black (Eric Martsolf) will step up to comfort her. Days of Our Lives spoilers state that they’ll share some warm moments, but Nicole will still be a mess as she awaits word on the Holly search. 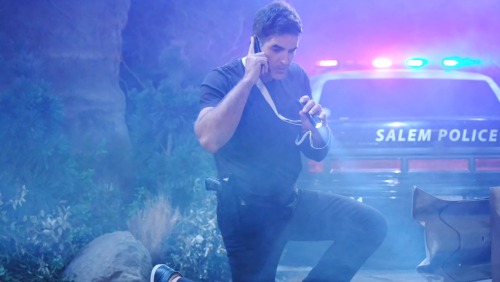 Across town, Rafe Hernandez (Galen Gering) will take a huge risk. He won’t agree with Hope Hernandez’s (Kristian Alfonso) orders, so he’ll choose to ignore them. Unfortunately, Days of Our Lives spoilers say that’ll turn out to be a horrible mistake. Thanks to Rafe’s actions, the van that’s supposedly transporting Holly will go over the side of a cliff.

That van will burst into flames eventually, so Rafe and everyone else will assume the worst. The good news is Holly will remain alive and well. The bad news is Xander Cook (Paul Telfer) and Ted Laurent (Gilles Marini) will keep Holly’s survival a secret. They’ll let all of Holly’s loved ones deal with total devastation later in the week.

Until then, Days spoilers say Victor Kiriakis (John Aniston) will play the blame game. He’ll insist Nicole is responsible for Holly’s kidnapping, but Maggie Kiriakis (Suzanne Rogers) will likely rush to her defense. Nicole’s been through a nightmare and now she’s facing an even worse one, so Maggie won’t want her name dragged through the mud.

It looks like some exciting scenes are coming up. We’ll give you updates as other Days details emerge. Stay tuned to DOOL and don’t forget to check CDL often for the latest Days of Our Lives spoilers, updates and news.