BY Heather Hughes on May 3, 2019 | Comments: 2 comments
Related : Days of Our Lives, Soap Opera, Spoiler, Television 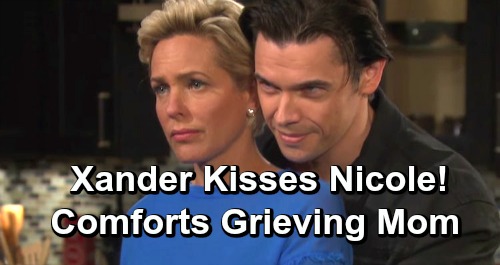 Days of Our Lives (DOOL) spoilers tease that Nicole Walker’s (Arianne Zucker) love life will be a big mess. That makes sense considering it won’t be her priority during the week of May 6-10. After Holly Jonas (Harlow and Scarlett Mallory) is presumed dead in a van explosion, Nicole will lose it. She’ll go off on Eric Brady (Greg Vaughan) for not keeping his promise to look out for her daughter.

After Nicole makes it clear that they’re done, she’ll find out that Brady Black (Eric Martsolf) didn’t want Holly staying at the DiMera mansion. That’ll pull Brady and Nicole closer, but there’s someone who could get in their way. Days spoilers say Xander Cook (Paul Telfer) will make his presence known, so Nicole will once again get caught in his web.

DOOL fans know Brady blackmailed Nicole out of town at one point. Then, Xander used the recording he found to blackmail Nicole into being his wife. Sadly, Xander will add to Nicole’s drama when he reveals he still has dirt on her. He’ll make a bad situation worse by using his leverage to his advantage.

Of course, Nicole may not even have the heart to care anymore. Without Holly, she may feel like it’s all meaningless. Nicole could end up accepting her fate and believing she somehow deserves a miserable life with Xander. You can bet Xander would love that!

Then again, Nicole might just be bitter and broken. She could decide she doesn’t care about anything anymore, so she might as well have some fun. Days of Our Lives spoilers state that Xander and Nicole will kiss on new Days episodes in the week ahead, May 6-10. Unlike in Nashville, it seems Nicole may reciprocate this time around. She might cave in and let herself feel lust since she’ll be too numb to feel anything else.

Will Nicole hook up with Xander like Dr. Sarah Horton (Linsey Godfrey) did in a moment of vulnerability? Anything’s possible since Nicole will be drowning in grief. You can bet both Eric and Brady will fume over Xander’s tight grip on her.

Naturally, Xander won’t have this grip forever. It’s obvious that “Ericole” is the endgame couple here. The whole point of Holly’s faked death storyline is to give them some angst. Days couldn’t just let Eric and Nicole be happy right off the bat, now could they? They had to bring the drama, and this is how they chose to do it.