Days of Our Lives Spoilers: Brady Steals Nicole After Holly Tragedy – Nicole Turns Back On Eric, Reunites With Brady

BY hellodrdavis on May 2, 2019 | Comments: 2 comments
Related : Days of Our Lives, Soap Opera, Spoiler, Television 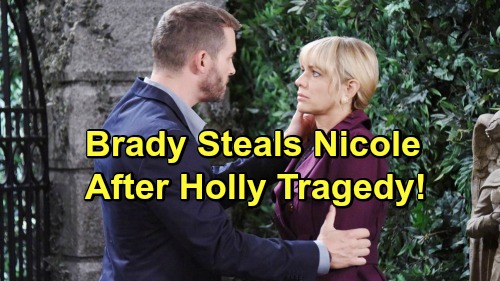 Days of Our Lives (DOOL) spoilers tease that Nicole Walker (Arianne Zucker) will experience total devastation. She fought her way back to health after sustaining serious injuries in the DiMera warehouse fire, and she made her way back to Salem. All she wanted was to reunite with Eric Brady (Greg Vaughan) and her daughter Holly Jonas (Harlow and Scarlett Mallory).

Nicole got her reunion with Eric, but Holly will be another story. Nicole will be faced with news of Holly’s kidnapping, and she’ll be devastated. Worse, Days of Our Lives spoilers say that Holly will be involved in a horrific accident during her kidnapping ordeal, and it will certainly look like she was killed or seriously injured as a result. Either way, Nicole is going to be in terrible shape.

According to DOOL spoilers, the whole situation will cause terrible strain in Nicole’s relationship with Eric. Before Nicole allegedly died in the warehouse fire, she begged Eric to take care of Holly. And when Nicole arrived at Eric’s apartment, she fully expected to find Holly there with him. Further, she seemed taken aback to learn that Chloe Lane (Nadia Bjorlin) was raising her little girl.

Days of Our Lives spoilers indicate that Nicole will soon lash out at Eric. She may blame him for contributing to Holly’s demise. After all, if Eric had taken custody of Holly like Nicole requested, she wouldn’t ever have been in the DiMera mansion to be kidnapped, and she wouldn’t have wound up in an accident.

Nicole will need someone to turn to, and since she’ll be terribly upset with Eric, it looks like she’s going to turn to another man from her past for comfort…Brady Black (Eric Martsolf). Brady will offer support to Nicole in the aftermath of Holly’s kidnapping and death, and he’ll be there for her in a way that Eric can’t be.

That leads us to wonder whether Nicole and Eric’s relationship will survive the Holly tragedy. If Nicole blames Eric for what happens to Holly, then there’s probably little hope that the two will ever reunite again. Sure, Eric is the love of Nicole’s life, but since it appears Holly dies and Nicole feels that Eric is partly responsible for it, then Nicole may turn her back on Eric for good.

And that could pave the way for a future Nicole-Brady pairing, especially if Brady is the one who offers Nicole support in the wake of Holly’s tragedy. What do you think? Would you like to see Brady and Nicole back together?

Of course, as CDL reported, it turns out Holly’s death will be staged and in fact she’s safe and sound. There is no word yet on how long this deception will continue but at some point Nicole will get Holly back safe and sound. Could it be too late for Ericole by then? Stay tuned to DOOL and don’t forget to check CDL often for the latest Days of Our Lives spoilers, updates, and news.