BY Heather Hughes on May 2, 2019 | Comments: one comment
Related : Days of Our Lives, Soap Opera, Spoiler, Television 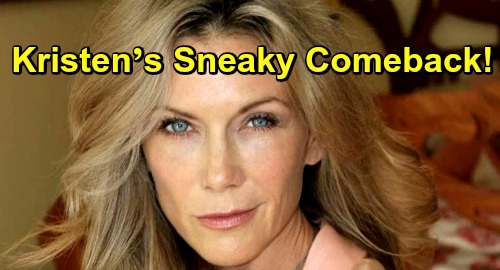 Days of Our Lives (DOOL) spoilers tease that Xander Cook (Paul Telfer) has much more in store for several unsuspecting Salemites. With Ted Laurent’s (Gilles Marini) help, Xander put quite a plot in motion. He kidnapped Holly Jonas (Harlow and Scarlett Mallory) as part of that plot, but there are still some big surprises ahead.

Xander warned Ted to pry a confession out of Hector (Osvaldo de León), who’s with the drug cartel. He wants to make sure the cartel takes the blame for this kidnapping. Ted doesn’t want his partner in crime blabbing to Hope Hernandez (Kristian Alfonso), so he’ll do what he’s told and score that admission of guilt.

However, it seems Xander has one more partner in crime – and this one could be just as menacing and dangerous as he is. Xander told someone on the phone that everything went smoothly. He left a message for this person to get back to him so they could discuss the next step in their plan.

This obviously wasn’t Ted since he was busy with Hope and already knew everything went smoothly. That means someone else is stirring the pot, and there’s a good chance it’s someone DOOL fans know quite well. Days of Our Lives spoilers hint that another major revelation is coming up soon.

Is Kristen DiMera (Stacy Haiduk) the other piece of the puzzle? Is she working behind the scenes on this abduction scheme? That seems likely since Days has some Kristen drama coming up for May sweeps.

Kristen would have a motive to stir up Holly-related trouble since Brady Black (Eric Martsolf) cares about the kid. She might think she can use Holly as leverage at some point. Kristen could be targeting her brother, Stefan DiMera (Brandon Barash), too. Stefan has grown to love Holly, so there are multiple angles Kristen could be working.

Of course, Kristen also just loves causing chaos – much like Xander does. They’ve both been known to create issues for Eric Brady (Greg Vaughan) and Nicole Walker (Arianne Zucker), so it’s reasonable for them to team up here. Days of Our Lives spoilers state that Kristen’s sneaky agenda will be exposed sooner or later. She’ll make quite a splash with her comeback, so don’t miss all the action.

Are you looking forward to all the Kristen mayhem? What’s she cooking up and does it involve a partnership with Xander? We’ll give you updates as other Days news comes in. Stay tuned to DOOL and don’t forget to check CDL often for the latest Days of Our Lives spoilers, updates and news.