Days of Our Lives Spoilers: Eve Fights Back With Justin’s Help – Sues Jack In Shocking Lawsuit? 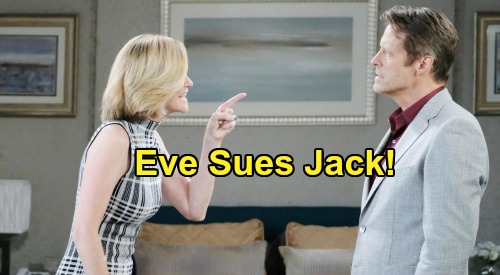 Days of Our Lives (DOOL) spoilers tease that Eve Deveraux (Kassie DePaiva) will soon have revenge on her mind. As DOOL viewers know, Eve has lost quite a bit in the past few days. Her husband, Jack Deveraux (Matthew Ashford) caught her in a horrifying act of sabotage, as she was burning Dr. Wilhelm Rolf’s (William Utay) diary, which contained the formula for the memory-inducing serum that Rolf developed.

But Eve didn’t stop there. She proceeded to tell Jack that she had injected him with a placebo rather than the real memory serum, then she destroyed the real vials of serum, right there in front of him. It was the last straw for Jack, and he angrily told Eve that he was seeking a divorce asap.

But Jack’s troubles didn’t stop there. After a chat with Jennifer Horton (Melissa Reeves) and Kayla Johnson (Mary Beth Evans), he realized that the lab which produced the serum may have retained the formula. But before he could get to the lab, Eve orchestrated a police raid and confiscated, then destroyed, the formula so that Jack could never get his memories back.

At that point, Jack had no other recourse against Eve but to fire her, and that’s exactly what he did. Eve cleaned out her desk and let the police station in a huff, but that won’t be the last that Jack hears from his soon-to-be ex-wife. According to DOOL spoilers, Eve will have a new plan and it will be designed to continue making Jack’s life miserable.

Eve will approach Justin Kiriakis (Wally Kurth) and beg him for her help, as she wants to go after Jack. But how is she planning on going after Jack? Well, one possibility is that she could be planning on fighting Jack in the divorce. However, it doesn’t seem like Jack has vast resources or money at this point, so it’s not like she can try to take him for his money.

But what about her termination from the police commissioner gig? She could try to go after Jack and the city for wrongful termination. After all, she probably didn’t do anything technically wrong by raiding the lab, if she can prove that there was a good reason to suspect that it was involved in some illegal activity. And sure, she burned Rolf’s diary, but that’s hardly grounds for dismissal from her job.

Eve could certainly cause Jack some serious problems if she sues him for wrongful termination. She’s a master at getting a public campaign going, so she could really whip up the community against Jack, even if her eventual lawsuit ends up being dismissed or settled. She could even cost Jack his job as mayor, if all the pressure over her termination causes him to resign.

At any rate, it will be interesting to see exactly what Eve has in store for Jack, but it certainly looks like it will involve an intense legal battle. Do you think she’ll sue him for wrongful termination? Stay tuned to DOOL and don’t forget to check CDL often for the latest Days of Our Lives spoilers, updates, and news.