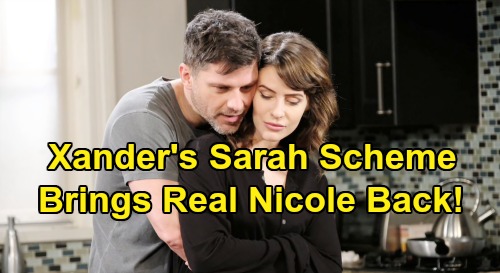 Days of Our Lives (DOOL) spoilers tease that Rex Brady (Kyle Lowder) is going to be seriously bummed. As DOOL viewers know, he’s just found out that his wife, Sarah Horton (Linsey Godfrey) is in love with another man, and it just happens to be his brother, Eric Brady (Greg Vaughan). In the coming days, look for Rex to unleash his wrath on Eric and have some choice words for his brother and his wife before he leaves Salem for good.

Well, that’s going to pave the way for Sarah and Eric to declare their love and finally get together. According to DOOL spoilers, that will happen in pretty short order, as the pair will soon wind up getting honest about their feelings and making love. Rex obviously won’t be happy about the whole thing, but it was pretty much in the cards.

But there will be someone else who’s going to be devastated about Sarah’s actions as well, and that’s Xander Kiriakis (Paul Telfer). As DOOL viewers know, Xander has had a crush on Sarah for months, and ever since the two slept together earlier this year, he’s been seriously pining for her. His sullen and sarcastic demeanor totally changes when Sarah is around and “soft Xander” emerges.

So, he’s going to be as upset – if not more upset – than Rex is over Sarah’s strong feelings for Eric. Xander was probably sitting back and waiting for Rex and Sarah’s relationship to implode, so that he could pounce and win over Sarah. But with Sarah immediately gravitating toward Eric, that’s just not going to happen.

According to Days of Our Lives spoilers, look for Rex and Xander – formerly bitter foes over Sarah – to actually bond and drown their sorrows together over Sarah’s feelings for Eric. The two men will wind up drinking together at The Brady Pub, and although they’ll be feeling miserable, it should be a bit humorous for viewers.

But while Sarah will end up with Eric for now, Xander might still have a chance with his lovely lady. It’s entirely likely that the real Nicole Walker (Arianne Zucker) is alive and out there somewhere, and if she eventually does come back from the dead for real, then Sarah’s future with Eric will certainly be kaput. Nicole is Eric’s true love, and Sarah won’t be able to compete.

Well, it stands to reason that Xander might know where the real Nicole is. After all, he worked closely with Kristen DiMera (Stacy Haiduk) at the Memphis warehouse where Nicole allegedly died. If Nicole is out there somewhere, Xander probably knows it, and he could very well scheme to bring her back with a nefarious purpose…to break up Sarah and Eric, to pave the way for a relationship of his own with Sarah!

Of course, this all assumes that the real Nicole survived, and that Xander would have access to her in order to bring her back, but Days buzz says that if anyone can make her re-emergence happen, then Xander could!

We’ll see what happens going forward, but Xander will do whatever he can to eventually end up with Sarah. Remember, TPTB  at DOOL have said that Sarah and Xander have the potential for a real lasting love story, so they just might be end-game.

Do you think that Xander might bring the real Nicole back in order to pry Sarah away from Eric? Stay tuned to DOOL and don’t forget to check CDL often for the latest Days of Our Lives spoilers, updates, and news.