Days of Our Lives Spoilers: Gabi Defends Stefan After Ted’s Murder – Stands By Her Man

BY hellodrdavis on August 4, 2019 | Comments: one comment
Related : Days of Our Lives, Soap Opera, Spoiler, Television 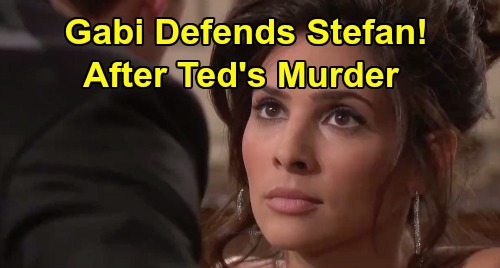 Days of Our Lives (DOOL) spoilers tease that Gabi DiMera (Camila Banus) thinks she’s right on track with her plan to take down Stefan DiMera (Brandon Barash). As DOOL viewers know, Gabi was recently presented with the perfect excuse to get Stefan to marry her. She needed to be a DiMera in order to be considered for the DiMera Enterprises CEO position, and she was able to convince Stefan to make her his wife.

And in the course of convincing Mr. Shin (Michael Hagiwara) that she should be the new DiMera CEO and not Nicole Walker (Arianne Zucker), Gabi finagled it so that Stefan would transfer all his power to her. It was the perfect situation for Gabi, who for months has wanted nothing more than to destroy Stefan, and the moment finally came when she could strike, and she told Stefan to pack his bags and leave the DiMera mansion.

But things aren’t going to be so simple for Gabi. First off, Stefan’s not going to go without a fight, especially since he’s truly falling for Gabi. It looks like he’ll even use the “L” word as he’s pleading with her to change her mind, as he tells Gabi that he loves her and that he thinks she loves him, too.

Well, of course Gabi does have strong feelings for Stefan, but whether she actually admits it will be another story. However, before long something awful is going to happen to Stefan, and then Gabi is going to have to choose whether she’s going to support her new husband or leave him high and dry as she’s been planning.

According to Days of Our Lives spoilers, Ted Laurent (Gills Marini) is going to wind up getting himself murdered after he comes face-to-face with Kristen DiMera (Stacy Haiduk). Kristen will shoot Ted dead, and she’ll use the opportunity to set up Stefan for his murder. It looks like Kristen will arrange to have Stefan find Ted’s body, and it will be one big setup to make it look like Stefan committed the murder!

And that’s going to leave Stefan in a world of trouble…but will his new wife support him? Well, it looks like Gabi is going to be absolutely shocked when she hears the news that Stefan is being accused of Ted’s murder. She’ll suspect a setup, as she just won’t be able to believe that Stefan could have killed anyone.

According to DOOL spoilers, Gabi will defend Stefan, and she will stand by her man, at least in terms of whether he’s guilty of the murder. It appears that the murder charges against Stefan will really make Gabi evaluate her true feelings for her husband…and it looks like she’ll probably end up stepping up and standing behind him, even as things look pretty bleak for him.

It will be interesting to see what happens going forward with Stefan’s murder charges. DOOL spoilers say that Ben Weston (Robert Scott Wilson) and Ciara Brady (Victoria Konefal) will get involved in trying to prove Stefan’s innocence, as Ben will be certain that his boss didn’t kill Ted. It looks like they’ll quickly zero in on “Nicole” as possibly being responsible for Stefan’s setup.

And surely Gabi will suspect that “Nicole” is behind Stefan’s troubles as well. It will be interesting to watch Gabi defend Stefan and work to save him. Do you think that this will eventually lead Gabi to abandon her big plan to bring Stefan down? Stay tuned to DOOL and don’t forget to check CDL often for the latest Days of Our Lives spoilers, updates, and news.