Days of Our Lives Spoilers Next 2 Weeks: Ben and Ciara Dig for Nicole Evidence – Eve’s Legal Battle – Kate Gets Caught 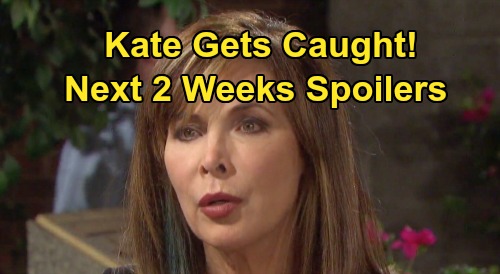 Days of Our Lives (DOOL) spoilers for the next two weeks tease that some Salem bombshells are on the way. During the week of August 5-9, Ted Laurent (Gilles Marini) will meet a tragic end. His confrontation with Kristen DiMera (Stacy Haiduk) and Tony DiMera (Thaao Penghlis) will lead to a sudden gunshot wound. Ted won’t be able to survive it, so this marks the end of the road for the character.

Kristen will frantically try to cover up this deadly outcome, but someone will catch her trying to get rid of the proof. Meanwhile, Stefan DiMera (Brandon Barash) will fume over Gabi DiMera’s (Camila Banus) sneakiness. She intends to take everything and shove Stefan out of the picture, but Stefan will still think she loves him deep down. Gabi will just have a tough time admitting it – even to herself.

Nevertheless, Gabi will work to clear Stefan’s name after he’s arrested for Ted’s murder. There’ll once again be serious evidence against Stefan, so Gabi will have her work cut out for her. Despite her hatred for Stefan at times, she’ll have to face the love she feels, too.

As Gabi works to get Stefan off the hook, Anna DiMera’s (Leann Hunley) comeback will leave Tony reeling over his newest union. Tony will hate the thought of hurting Anna and being stuck in a marriage for show, so he’ll tell Kristen he wants out. Of course, Kristen won’t allow it. She’ll do her best to reel Brady Black (Eric Martsolf) in and keep juggling her Tony scheme on the side.

Other Days of Our Lives spoilers say Rex Brady (Kyle Lowder) will punch Eric Brady (Greg Vaughan) and confide in Xander Cook (Paul Telfer). Xander will laugh at Rex’s misfortune, but Rex will choose to let go and move on with his life. DOOL fans will can expect one last warning for Sarah, so she’ll worry her new romance with Eric may be doomed. Even so, Sarah will make love to Eric and live in the moment.

During the week of August 12-16, some investigations will get underway. Hope Brady (Kristian Alfonso) will recruit John Black (Drake Hogestyn) with help for solving a mystery. She’ll be determined to catch Ted’s killer and figure this mess out.

Over with Ben Weston (Robert Scott Wilson) and Ciara Brady (Victoria Konefal), they’ll start an investigation of their own. They’ll hope to secure incriminating evidence against “Nicole,” but it seems they’ll find Kate Roberts (Lauren Koslow) making a deal with her instead. Elsewhere, Chloe Lane (Nadia Bjorlin) will think “Nicole” needs professional help. She’ll hope Marlena Evans (Deidre Hall) can listen to “Nicole’s” problems and perhaps put her on a better path.

Days of Our Lives spoilers say Marlena will just wind up angering “Nicole” instead. Kristen will fume over her enemy’s advice and resume focusing on selfish goals. Back with Xander, he’ll reach an agreement with Hope and John. That sounds like the kind of thing that could mean big trouble for Kristen!

Finally, Days spoilers state that Eve Deveraux (Kassie DePaiva) will prep for a legal battle. She’ll try to get Justin Kiriakis (Wally Kirth) on her side for the court drama ahead. Eve will hope she can take on Jack Deveraux (Matthew Ashford) in this new war, so DOOL viewers should be ready for the fallout.

The next two weeks will bring plenty of hot scenes. We’ll give you updates as other Days news comes in. Stay tuned to DOOL and don’t forget to check CDL often for the latest Days of Our Lives spoilers, updates and news.