Days of Our Lives Spoilers: Kristen’s Run As Nicole Reaches The End – See Who Will Expose Her

BY hellodrdavis on August 3, 2019 | Comments: one comment
Related : Days of Our Lives, Soap Opera, Spoiler, Television 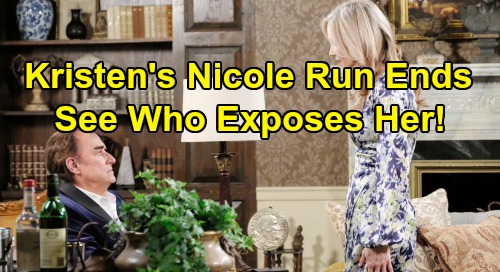 Days of Our Lives (DOOL) spoilers tease that Kristen DiMera (Stacy Haiduk) plans on staying “in character” as Nicole Walker (Arianne Zucker) for as long as possible. She’s got two big objectives – get her hands on the DiMera empire and away from Stefan DiMera (Brandon Barash) and get Brady Black (Eric Martsolf) all to herself, albeit as “Nicole.”

But lately Kristen has started to unravel a bit. She nearly lost it when Mr. Shin (Michael Hagiwara) chose Gabi DiMera (Camila Banus) as DiMera’s new CEO over “Nicole.” She ranted and raved in a manner that was completely uncharacteristic of Nicole, and very characteristic of Kristen. One wonders just how long she’ll be able to keep up her ruse and continue to pose as Nicole.

At some point, you’d think that someone would realize that something is very wrong with “Nicole,” and/or that Kristen seriously slips up and reveals herself to someone she isn’t able to kill or intimidate into keeping quiet. But how will that happen, and who will be the person to finally expose “Nicole” as being Kristen?

As we see it, there are a few leading contenders for who might finally be the person to unmask “Nicole” and expose Kristen as being alive.

First off, we’ve got Ben Weston (Robert Scott Wilson) and Ciara Brady (Victoria Konefal). According to DOOL spoilers, these two will team up after Stefan is arrested for Ted Laurent’s (Gilles Marini) murder. Ben simply won’t believe that his boss could have killed the ex-DA, and he and Ciara will go on a quest to find out who could have set up Stefan. Their first order of business will probably be to figure out who’s got a grudge against Stefan, which could very well lead them in “Nicole’s” direction.

Like Ben & Ciara, Gabi will think that something’s seriously wrong with the idea of Stefan murdering Ted. Gabi will still be struggling with her polarized feelings toward Stefan – on the one hand, she wants revenge on him, but on the other hand, she’s falling in love with him. But she won’t be convinced at all that Stefan’s a murderer, plus it just won’t make sense that he’d want Ted dead. It looks like Gabi could very well be the one to suspect that “Nicole” is behind Stefan just happening upon Ted’s body.

Next, there’s Hope Brady (Kristian Alfonso), who will absolutely reel after Ted’s murder. According to DOOL spoilers, she’ll want to get to the bottom of not only what Ted was hiding from her, but who had motive to kill him. It doesn’t look like she’ll think that the allegations against Stefan have much merit, either.  Look for Hope to get John Black (Drake Hogestyn) involved in her private investigation into Ted’s murder – it shouldn’t take them long to start poking holes in the police’s case against Stefan and looking for another suspect.

Of course, Xander Kiriakis (Paul Telfer) will probably put two and two together pretty quickly and realize who killed Ted. Xander is well-aware that Kristen is alive and parading around as Nicole, but he’ll probably know better than to say anything, given that Kristen’s liable to shoot and kill him, too! But an interesting development seems to be coming, since DOOL spoilers indicate that Xander will enter into some sort of deal with Hope and John, so he might just end up spilling the beans and exposing Kristen.

So far, Marlena Evans (Deidre Hall) hasn’t been a part of Kristen’s return storyline, but that will soon change! Given that Kristen is starting to have difficulty in maintaining her demeanor as Nicole, people are going to start to notice “Nicole’s” weird behavior. Look for Chloe Lane (Nadia Bjorlin) to ask Marlena to talk with Nicole about her bizarre behavior, which will put Marlena directly into Kristen’s orbit.

According to DOOL spoilers, Kristen (as Nicole) will end up losing her cool with Marlena, so Marlena will get the picture pretty quickly that something’s seriously wrong with Nicole. But will she recognize the behavior as being Kristen’s?

According to DOOL spoilers, “Nicole” and Brady will soon get closer…much closer. Kristen (as Nicole) has been making advances on Brady virtually nonstop since she came back into town, and Brady will soon succumb to her advances. The two will end up making love, and remarkably, Brady apparently won’t notice that he’s with Kristen instead of Nicole. Although it’s always possible that Brady could wake up and realize that Nicole is Kristen, we consider him to be the least likely at this point to finally expose Kristen.

Last on our list is Kate DiMera (Lauren Koslow), who could conceivably expose Kristen at any time. She’s of course unaware that Kristen is masquerading as Nicole, but she certainly knows that Kristen is alive and well. But once Ted is murdered, she’ll probably be even more scared to come forward than she is now. And since Kristen has threatened Kate’s kids, she’s probably just as unlikely as Brady to expose Kristen at this point.

Who do you think will ultimately expose Kristen and reveal her existence to the people of Salem? Stay tuned to DOOL and don’t forget to check CDL often for the latest Days of Our Lives spoilers, updates, and news.