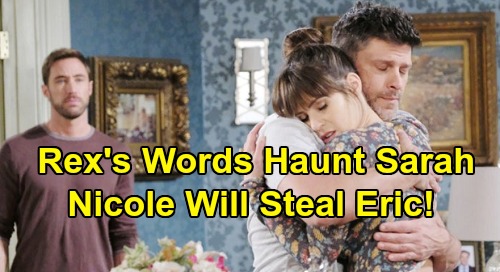 Days of Our Lives (DOOL) spoilers tease that Sarah Brady’s (Linsey Godfrey) blowup with Rex Brady (Kyle Lowder) will put her on a new path. She’ll have a heartfelt chat with Maggie Horton (Suzanne Rogers) during the week of August 5-9. Sarah will explain that her marriage has ended in disaster, so Maggie won’t see why her daughter should deny her true feelings any longer.

Once Sarah mulls it over, she’ll see that Maggie is right. Sarah will go to Eric Brady (Greg Vaughan) and insist that he’s the one she wants. She’ll admit she only married Rex because she believed Eric and “Nicole Walker” (Arianne Zucker) still had a chance.

Since “Nicole” is adamant that things are over and Sarah’s relationship with Rex will be kaput, Sarah won’t think anything’s standing in their way.

Eric Brady Encourages Sarah Horton Not To Throw Marriage Away

Days of Our Lives spoilers say Eric will put up a fight at first. He won’t want Sarah throwing away her marriage, but she’ll argue that there’s nothing to salvage. Sarah will make it clear that Rex understands where her heart lies and is done with her. She’ll be all in on a new romance with Eric, so DOOL fans can expect him to finally cave in.

It won’t be long until Eric and Sarah’s passion erupts. Days spoilers state that they’ll make love – and it looks like it’ll be pretty wild. They’ve been holding back and dancing around what they want for quite some time, so there’s plenty of built-up desire. Eric and Sarah will definitely enjoy putting some real heat between them.

However, Sarah will get a troubling warning soon after. It turns out she’ll get busy with Eric before Rex even leaves town! Days of Our Lives spoilers say Rex will quit his job and pack up his belongings. He won’t think there’s anything left for him in Salem, so Rex will prepare to hit the road.

What Will Happen When The Real Nicole Walker Returns To Salem?

Before Rex heads out, he’ll have some harsh words for Sarah. Rex will likely warn that Nicole is always going to be Eric’s true love. Since Rex will be feeling jilted, he’ll take the opportunity to spook Sarah a bit.

Rex may suggest that sooner or later, Sarah will get her heart broken just like he did. He may note that he wanted Sarah and only Sarah, but Nicole will always come first for Eric.

Of course, Rex knocked up his ex and slept with Sarah’s sister, so she’s not losing some big prize. Still, Rex’s words will haunt Sarah. Part of her will fear that Rex is right – and we all know he will be! The real Nicole’s return should bring Sarah’s worst nightmare, but at least Xander Cook (Paul Telfer) can be her backup beau.

It sounds like some exciting developments are brewing in Salem. We’ll give you updates as other Days news comes in. Stay tuned to DOOL and don’t forget to check CDL often for the latest Days of Our Lives spoilers, updates and news.