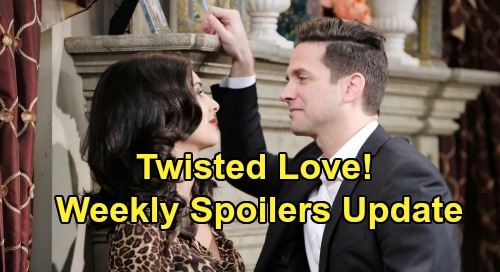 Days of Our Lives (DOOL) spoilers update for the week of August 5-9 tease that some shockers are brewing in Salem. First, Hope Brady (Kristian Alfonso) will put Kate Roberts (Lauren Koslow) on the hot seat. She’ll interrogate Kate about the kidnapping and try to poke more holes in the story. Hope just won’t accept that Stefan DiMera (Brandon Barash) was behind the plot.

Afterward, Stefan will be arrested once again – this time for murder! Days spoilers state that Gabi will fear for Stefan when she gets updates. She’ll realize she truly cares, but does she care enough to bail on her plan? Gabi will have to decide if she wants to make things right. Once she decides that, she’ll have to decide if it’s even possible. Stefan will surely be furious with Gabi for deceiving and pulling off a prenup trick.

Over with Rex Brady (Kyle Lowder), he’ll let Sarah Brady (Linsey Godfrey) know he intends to leave town. Before Rex puts Salem in the rearview mirror, he’ll remind Sarah of Eric Brady’s (Greg Vaughan) deep love for Nicole Walker (Arianne Zucker). Rex will suggest that Sarah’s setting herself up for heartbreak, so she’ll be a bit haunted by the warning.

Nevertheless, Sarah will choose to be happy with the man she really wants. She’ll make love to Eric this week and officially kick off their new romance. Elsewhere, Days of Our Lives spoilers reveal that Anna DiMera (Leann Hunley) will return. Her sudden appearance will definitely affect Tony’s heart. He’ll tell Kristen he wants out of their marriage immediately, but Kristen will do her best to keep him on board.

As for Kristen, she’ll get what she’s been longing for when Brady Black (Eric Martsolf) finally surrenders. Brady will sleep with “Nicole,” so this won’t exactly be Kristen’s dream bedroom reunion. She’d rather Brady love her for her, so she’ll consider coming clean about who she is after their sex session.

However, Kristen will ultimately scrap that idea for now and focus on her fight for her power. She’ll be glad she’s inching closer to Brady, but she’ll want to take back DiMera Enterprises from Gabi as well. Back with Tony, DOOL spoilers say he’ll give Kate a fright. She’ll faint at the sight of what she assumes is Andre DiMera (Thaao Penghlis), so Tony will have to explain once she comes to.

It sounds like some fantastic episodes are on the way. We’ll keep you posted as other Days news emerges. Stay tuned to DOOL and don’t forget to check CDL often for the latest Days of Our Lives spoilers, updates and news.