BY hellodrdavis on August 2, 2019 | Comments: one comment
Related : Days of Our Lives, Soap Opera, Spoiler, Television 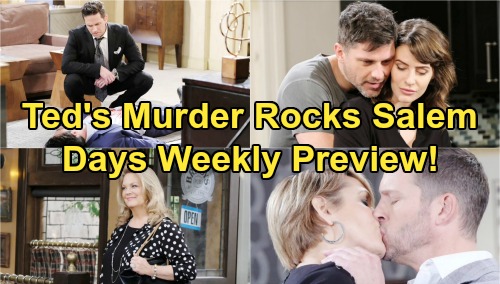 Days of Our Lives (DOOL) spoilers preview teases that we’re in for a week of big drama, complex feelings, and a shocking death. The DOOL promo for the week of August 5 to August 9 promises a lot of action, so let’s jump right in! First off, the promo addresses the demise of Rex Brady’s (Kyle Lowder) relationship with Sarah Horton (Linsey Godfrey). As DOOL viewers know, Rex walked out on Sarah after she admitted to loving Rex’s brother, Eric Brady (Greg Vaughan).

The promo shows Rex attempting to cope with this revelation. For one, he’s shown punching Eric after a confrontation in Eric’s apartment. Of course, DOOL viewers probably expected that to happen eventually. But something that may be unexpected is Rex’s next move…going drinking with Xander Kiriakis (Paul Telfer).

It looks like Rex will end up downing a few at the Brady Pub, where he encounters Xander. Of course, Xander won’t be too thrilled to hear the story about Sarah being in love with Eric, since he’s sweet on Sarah, too. The two men will commiserate together, and oddly Xander might provide some comfort to Rex. They’re even shown standing together outside the Brady Pub, as Xander busts out drunk laughing as Rex laments over his wife being in love with his own brother.

Next, the promo addresses the contentious situation between Gabi DiMera (Camila Banus) and Stefan DiMera (Brandon Barash). Of course, Gabi has just become CEO of DiMera Enterprises and Stefan has been stripped of all power. Then Gabi promptly told Stefan to pack his bags and leave the mansion! From the promo, it looks like they have some more talking to do, as Stefan is likely going to refuse to leave his home.

Ongoing Days of Our Lives spoilers indicate that Gabi is going to have a hard time reconciling her desire for revenge on Stefan with her growing feelings for him. It’s clear that the pair is starting to fall in love, and it looks like Stefan’s going to lay his feelings on the line, then confront Gabi about hers. He’s shown in the promo telling Gabi that he knows she loves him while Gabi stares back.

We’ll see what Gabi chooses to do next. Something tells us it will be quite difficult for her to follow through on her plan to leave Stefan high and dry, even though her original plan to destroy him seems to be working out nicely.

Finally, the promo addresses a shocking development on the Salem scene – the death of Ted Laurent (Gilles Marini), which will happen on Monday, August 5. According to DOOL spoilers, Ted will meet his demise during an encounter with Kristen DiMera (Stacy Haiduk) and her gun.

Ted will come face-to-face with Kristen, who will promptly shoot and kill him. From there, it looks like his body will be moved, as the promo shows a person with gloved hands putting Ted’s lifeless body into a trunk. Later, the body will be placed in Ted’s apartment, where Stefan will find him, and it will all be a set-up by Kristen to frame Stefan for Ted’s murder.

At any rate, the new police commissioner, Eli Grant (Lamon Archey) will have a big first case as he leads the investigation into Ted’s murder. How long will it take for the Salem PD to realize that the body was moved? And importantly, will Gabi choose to support her husband when he’s under suspicion for Ted’s murder? DOOL viewers will have to tune in next week to see!