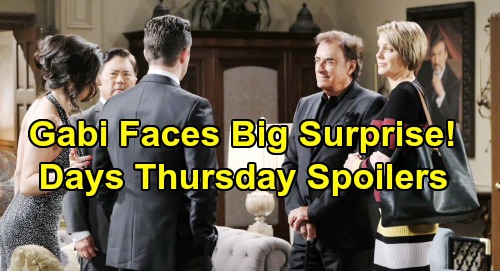 Days of Our Lives (DOOL) spoilers for Thursday, August 1, tease that some jaw-dropping news is headed Eric Brady’s (Greg Vaughan) way. He’ll be stunned when he learns “Nicole Walker” (Arianne Zucker) married Tony DiMera (Thaao Penghlis), so he’ll definitely have some questions. Brady Black (Eric Martsolf) may be on the hot seat since he went with “Nicole” and witnessed this not-so-blessed event.

Eric might think Brady should’ve talked some sense into “Nicole.” Even if Brady explains “Nicole’s” agenda, Eric may feel like this is just too bizarre and extreme. Whatever the case, conflict will break out between the brothers. Brady may remind Eric that “Nicole” can make her own decisions and certainly doesn’t want Eric’s input. It won’t be long until insults are hurled, so Eric will pummel Brady into a door.

While Eric launches an attack, Days spoilers say Sarah Brady (Linsey Godfrey) will royally screw up. She’ll be in bed with Rex Brady (Kyle Lowder) when she accidentally tells him she loves Eric! Sarah will call Rex by the wrong name when she’s trying to reciprocate a love profession, so she’ll scramble to explain. She might try to play it off as a slip of the tongue at first, but even a simpleton like Rex won’t buy that.

Days of Our Lives spoilers say Sarah will ultimately confess it’s true. She’s in love with Eric, so her marriage to Rex is about to fall apart. Over with Hope Brady (Kristian Alfonso), she won’t be able to shake her concerns about Ted Laurent (Gilles Marini). DOOL fans can expect even more concerns after Hope makes a surprising discovery in Ted’s apartment.

It looks like Hope will find mountains of cash, so it won’t be long until she confronts Ted about where it came from. She may assume he accepted the money to lie about Stefan DiMera (Brandon Barash) being his kidnapper. The cash seemingly came from his role in Holly Jonas’ (Harlow and Scarlett Mallory) faked death plot instead, so it’s not like Ted will have any chance with Hope if he comes clean.

Finally, Days of Our Lives spoilers say Gabi DiMera (Camila Banus) will be ready to take the throne at DiMera Enterprises. She’s in for a shock along when “Nicole” walks in and reveals her new husband, Tony! Mr. Shin (Michael Hagiwara) will have a tough decision to make, so stay tuned for some CEO chaos.

It sounds like some fantastic scenes are coming up. We’ll give you updates as other Days details emerge. Stick with DOOL and don’t forget to check CDL often for the latest Days of Our Lives spoilers, updates and news.