Days of Our Lives Spoilers: Eve Offers Justin A Job – Will A Kiriakis Be Salem’s Next DA?

BY hellodrdavis on June 16, 2019 | Comments: one comment
Related : Days of Our Lives, Soap Opera, Spoiler, Television 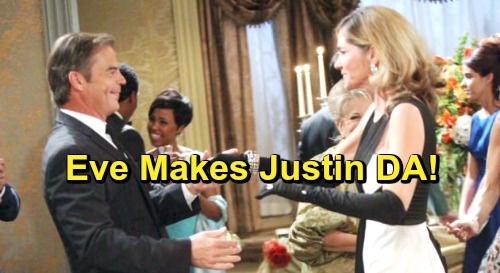 Days of Our Lives (DOOL) spoilers tease that Eve Deveraux (Kassie DePaiva) and Jack Deveraux (Matthew Ashford) will soon have a dilemma on their hands. They need a District Attorney and they need one now. As DOOL viewers know, the Interim DA Ted Laurent (Gilles Marini) quit in protest after Jack fired Hope Brady (Kristian Alfonso) from her police commissioner post.

Eve recently tried to woo Ted back to be the permanent DA, but he refused. He doesn’t want anything to do with Jack’s administration, and he certainly doesn’t want anything to do with Eve. Even smarmy Ted has standards! And Jack can’t exactly offer the position to Melinda Trask (Laura Kai Chen), since he has made it the cornerstone of his administration to go after her daughter Haley Chen (Thia Megia).

All of this will leave Salem with no acting DA, which is a problem. Well, it looks like Jack will hand over the task of finding a new DA to Eve, and she’ll have an idea. There are only so many attorneys in Salem, and it looks like Eve will turn to a familiar face for help.

As DOOL viewers may remember, Eve and Justin Kiriakis (Wally Kurth) have been well-acquainted in the past. They were romantically involved several years ago, and according to Days of Our Lives spoilers, Eve will offer Justin a job. There’s really only one job that he’d be qualified for, and that’s the job of District Attorney.

But will Justin take the DA gig? He’s certainly a stand-up guy and would do a great job in the role, but there would be some complications. For one, Justin previously defended Haley in her quest to avoid deportation, at JJ Deveraux’s (Casey Moss) request. Justin seemed to be full-on “team Haley,” so he might not be totally on board with what Jack’s administration stands for.

After all, Jack and Eve have taken a strong stand against undocumented immigrants, and Justin may not want to support the tenets of the Deveraux doctrine. But on the other hand, Justin may think that he can help curb some of the Deveraux more undesirable tendencies, so he might think that if someone’s going to be in the role, it may as well be him.

Exactly how Justin responds to Eve’s job offer remains to be seen, but it would be interesting to see a Kiriakis in the role of DA. It would make for an interesting turn of events, since Justin has spent quite a bit of time defending various Salem residents in the past. If he takes the DA gig, then he’d be responsible for prosecuting some of the same people he’s defended in the past!

Do you think that we’ll see Justin as the next Salem DA? Stay tuned to DOOL and don’t forget to check CDL often for the latest Days of Our Lives spoilers, updates, and news.