BY hellodrdavis on August 18, 2019 | Comments: one comment
Related : Days of Our Lives, Soap Opera, Spoiler, Television 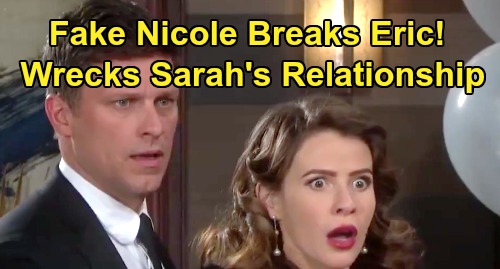 Days of Our Lives (DOOL) spoilers tease that Eric Brady (Greg Vaughan) is going to get a huge shock. As DOOL viewers know, despite his happiness lately over his blossoming relationship with Sarah Horton (Linsey Godfrey), he’s been through a lot in the past few months. His true love Nicole Walker (Arianne Zucker) came back from the dead, which initially brought him great joy. But then Nicole turned on Eric and blamed him for Holly Jonas’ (Harlow and Scarlett Mallory) death, and his heart broke.

But soon, Eric will have another major revelation hit him in the face. According to Days of Our Lives spoilers, Eric will get a big shock when he suddenly realizes that the woman that he and everyone else thought was Nicole is actually Kristen DiMera (Stacy Haiduk). John Black (Drake Hogestyn) will unmask Kristen, ripping off her “Nicole” mask in front of everyone at John and Marlena Evans’ (Deidre Hall) anniversary party.

And in typical DOOL style, chaos will ensue. In the process of her unmasking, Kristen will pull a gun on Marlena, and it will just be a big mess for everyone. There will be plenty of shock to go around as everyone realizes that the Nicole who miraculously came back from the dead isn’t really Nicole, and never has been. Brady Black (Eric Martsolf) will certainly be furious, as he learns that he’s been sleeping with Kristen, and not Nicole.

But imagine how devastating the big Nicole/Kristen reveal is going to be for Eric! He’ll slowly realize that this probably means that Nicole actually did die in that warehouse fire, or at least that’s probably what he’ll initially believe. It will traumatize him all over again.

But after he gives the matter a little thought, he might start to wonder about the likelihood that Nicole is really out there alive somewhere. After all, a lot of people have been discovered to have survived that warehouse fire, and he may figure that if Kristen survived the fire, then Nicole might have survived as well.

Plus, there will be another big reveal that may strengthen Eric’s resolve to find out if there’s any way Nicole could have survived – the reveal about Holly. According to DOOL spoilers, Xander Kiriakis (Paul Telfer) will soon let it be known that Holly isn’t really dead. Eric will reel from that revelation as well, and it looks like he, as well as Sarah and Maggie Kiriakis (Suzanne Rogers) will want to find Holly asap.

At any rate, there are going to be a lot of questions arising about Holly and about Nicole’s possible survival, and that’s going to make things difficult on Eric and Sarah’s relationship. These two have just jumped through some pretty big hoops to get together, and now Kristen’s big reveal will happen. It will stir up some serious feelings about Nicole for Eric, and that could ultimately hurt his relationship with Sarah.

Of course, Sarah is fully aware that Nicole was/is the love of Eric’s life, and she could be shattered by his newfound drive to find Nicole. But she’ll know that if Nicole’s out there somewhere, then she needs to come home to Holly, so chances are she’ll help out with the search, even though she knows the outcome could ultimately destroy her relationship with Eric.

Do you think that Eric and Sarah’s relationship has any hope at this point? Stay tuned to DOOL and don’t forget to check CDL often for the latest Days of Our Lives spoilers, updates, and news.