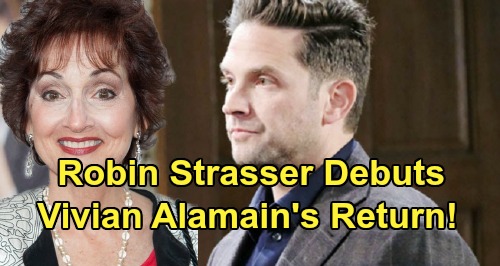 Days of Our Lives spoilers tease that Vivian Alamain (Robin Strasser) will also return to Salem on September 3, 2019, apparently along with Dr. Wilhelm Rolf (William Utay) as he has the same airdate. Robin Strasser, formerly Dorian Lord on the defunct ABC soap “One Life To Live” will be replacing Louise Sorel in the role.

In February 2018 Robin Strasser herself tweeted that the Days of Our Lives powers that be had indeed invited her to play a role but at that time she didn’t know for sure who she would be playing. There was also an earlier leak when a Days of Our Lives actor had inadvertently caught Robin from the back holding her two dogs on the set, but it was never confirmed it was her or not. But her fans recognized her dogs!

A little later, Soap Opera Digest confirmed that she would be coming over to the Days of Our Lives canvas, but not when nor who she would be playing.

Vivian Alamain, who is Stefan DiMera’s (Brandon Barash) mother, was also apparently in the “resurrection warehouse” in Nashville since there was a door with her initials on it. Of course we know this building exploded thanks to Dr. Rolf’s clumsiness.

The door with Vivian Alamain’s initials on it was shown in DOOL episodes in October, 2018, although Vivian herself, then played by Robin’s friend Louise, was last seen on May 23, 2018. She had been given a mysterious injection in the neck.

Later, Kate DiMera (Lauren Koslow) thought she had killed Vivian when she had a flashback to shooting her in cold blood; however, Vivian had come to after being moved to a dark, dingy room which may have been in the facility in Nashville.

Robin will enjoy reunions with some old “One Life To Live” castmates as well as Ron Carlivati, who formerly wrote for the defunct ABC soap. Over there, Kassie DePaiva played Blair Cramer, niece of Robin’s character Dorian Cramer Lord. Robin had played Dorian for 1979 to 1987 and again from 1993 to 2011 when it was cancelled by ABC.

Robin reprised Dorian Lord on the internet version of the soap from April through September 2013, when it too was cancelled as the result of an infamous lawsuit between ABC and Prospect Park, the now defunct company who produced the internet revival of the soap.

On July 20 2019, a fan tweeted to Robin wanting more information about when she would appear on DOOL. Robin tweeted back saying she would be starting in September but it would only be for fifteen episodes. Whether they will be continuous or not remains to be seen. Stay tuned to Days of Our Lives and keep checking Days of Our Lives spoilers frequently for all the latest news, updates and developments!