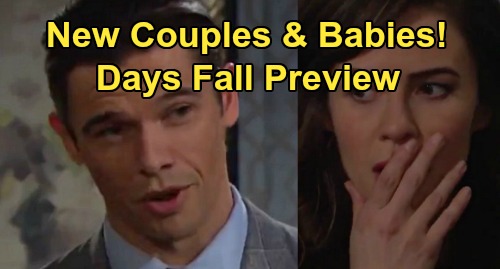 Days of Our Lives (DOOL) spoilers tease that we’re in for an exciting fall season. The new DOOL fall preview video is jam packed full of romance, drama, family heartbreak, and some big surprises. It’s a lot to unpack, so in this post we’ll recap the romance and relationship drama and we’ll consider the action and intrigue aspects of the promo in a separate post.

First off in the relationship department, the promo shows Jack Deveraux (Matthew Ashford) and Jennifer Horton (Melissa Reeves) together and happy, which is a far departure from the terrible time these two have been having lately. They’re shown smiling at each other and looking very much in love as Jen happily says, “It’s us. You and me.”

Of course, this strongly suggests that Jack is going to get his memories back from his life with Jennifer. It certainly looks like Jack has moved on past his Eve Donovan (Kassie DePaiva) troubles and is back together with Jennifer, which is great news for Jack and Jen fans. Now, whether Jack keeps his job as mayor and continues down that path remains to be seen!

Another big reunion that DOOL viewers can expect is that of Eric Brady (Greg Vaughan) and the real Nicole Walker (Arianne Zucker). Of course, Eric was simply not going to rest until he found Nicole, and in the promo, Nicole is shown walking out of a room and embracing Eric big time. After months of fake Nicole drama, “Ericole” fans will finally get their real reunion. And it’s not just Nicole who will appear, but Holly Jonas (Harlow and Scarlett Mallory) as well, so Eric will get to bring them both back home to Salem.

Of course, that will leave Sarah Horton (Linsey Godfrey) out in the cold, but we’ve got some big developments where Sarah is concerned, too. She’s shown in the promo getting sick on the floor in hotel room with Xander Kiriakis (Paul Telfer), and in another sequence Xander jokingly says that maybe she’s “preggers.” Since DOOL spoilers do indicate that Sarah will find herself pregnant and not knowing whether the father is Rex Brady (Kyle Lowder) or Eric, she’ll be in a pickle.

Fortunately, though, it looks like Sarah will have Xander on her side to help her in her time of need. Sarah and Xander are also shown embracing and kissing in the promo, so it looks like things will be going in the romantic direction for these two as Sarah deals with her pregnancy woes and morning sickness!

And in another big family moment, Stefan DiMera (Brandon Barash) is shown both happily kissing Gabi DiMera (Camila Banus) and then reuniting awkwardly with his mother Vivian Alamain (Robin Strasser), who will be back from the dead, thanks to Dr. Wilhelm Rolf (William Utay). Of course, this will all come as a huge shock to Stefan, and he’s shown in the promo expressing surprise and bewilderment at Vivian’s return.

And then there’s Kristen DiMera (Stacy Haiduk), who is shown looking happy in the promo, but aptly alone. According to DOOL spoilers, Kristen will do everything she can to rekindle her romance with Brady Black (Eric Martsolf), but from all accounts it doesn’t look like that’s going to go so well. Chances are, she’ll give it the old college try, but will Brady ever be drawn back into her web?

Perhaps the biggest Salem moment as far as romance is concerned will be the fall wedding of Lani Price (Sal Stowers) and Eli Grant (Lamon Archey). Abe Carver (James Reynolds) will happily walk his daughter down the aisle as Salem gathers to celebrate Lani and Eli’s union. Marlena is shown in the promo telling them that nothing will ruin their special day, which might be a bad sign coming from Marlena, since every event she’s been a part of in the past year or so has ended in disaster! Here’s hoping Lani and Eli’s wedding remains drama free!

Well, that’s it for relationship drama as far as the new fall promo is concerned. It looks like we’re in for an exciting fall, so stay tuned! We’ll give you updates as DOOL news comes in. Stick with the NBC soap and don’t forget to check CDL often for the latest Days of Our Lives spoilers, updates, and news.